This WW Cold Cucumber Soup is similar to gazpacho, but instead of tomatoes, you use cucumbers.

I found this Cold Cucumber Soup recipe in my County Living Magazine a few years ago. 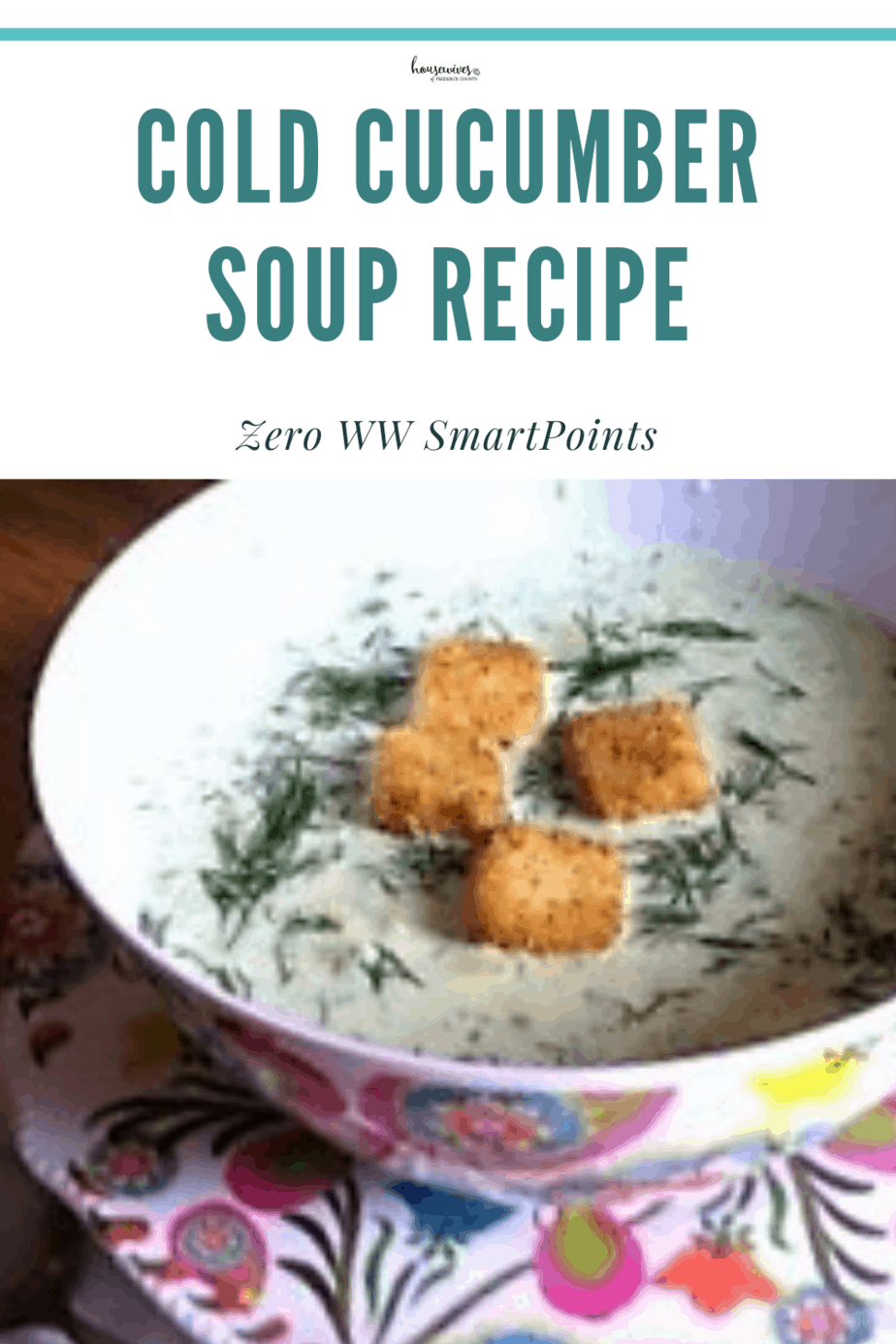 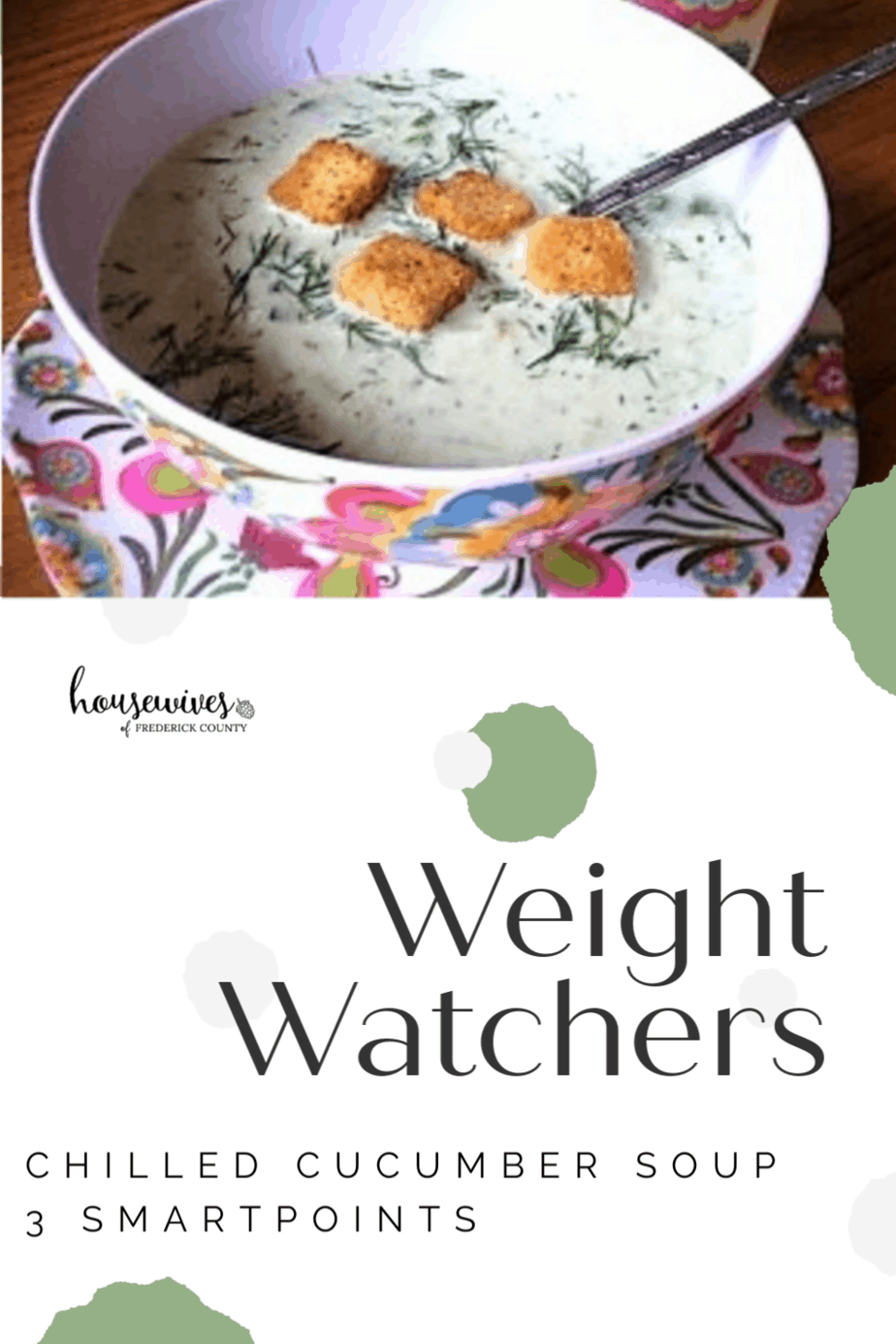 In the recipe I list the serving size as 1 to 2 cups.

However, the Country Living recipe did not specify serving size.

It just says that it makes 6 servings.

I love the fact that it is a cold soup, especially during the warmer months when the temps outside are hot and sticky.

This soup is so refreshing and very satisfying too! 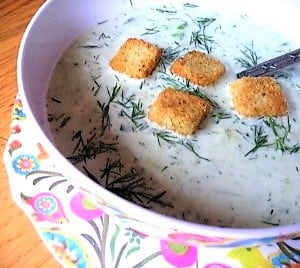 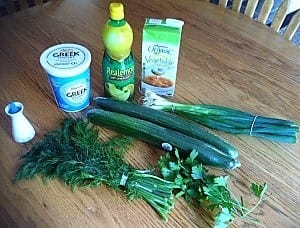 As you can see, it’s a very simple and fresh recipe.

The only downfall is the amount of sodium, but you can omit the 2 teaspoons of salt added to the soup. 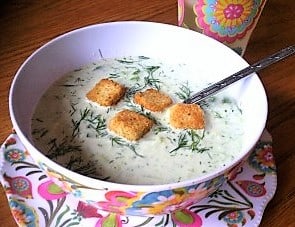 This soup was so tasty.

It reminded me of that Greek dipping sauce, Tzatziki, but in a soup form.

The croutons and fresh dill really add to the taste of the soup.

Keep in mind though, that the croutons are not added in with the WW SmartPoints or the nutrition information.

So, you will need to add that in if you’re tracking for weight loss.

However, I used lemon juice from the bottle.

But, in my opinion, it’s just as good.

Also, if you’re not sure what English cucumbers are, and I wasn’t either, they are the longer, thinner, seedless variety.

I bought my ingredients at Wegmans because of their awesome produce selection. 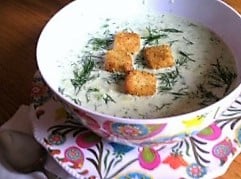 We happened to have the fresh parsley growing outside so I just picked a bunch.

Also, I used my blender (Amazon) to puree the cucumbers, green onions, dill and parsley because I don’t have a food processor.

But if you prefer to use a food processor, this Hamilton Beach 10-Cup Food Processor & Vegetable Chopper with Bowl Scraper on Amazon gets amazing reviews and is very affordable. 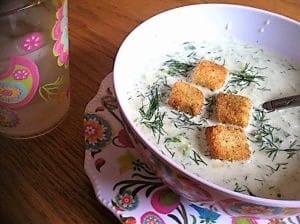 I served this soup as an appetizer to our grilled swordfish and boiled red potato dinner last night.

My family loved it!

So if you’re looking to make something a little bit different, that’s very satisfying, refreshing and healthy, try this Cold Cucumber Soup recipe out!

I guarantee you, you won’t be disappointed!

For more delicious recipes involving cucumbers, click on over to: