The Ravens have only been in existence since 1996 and have been to the playoffs 9 times AND won the 2001 Super Bowl against the New York Giants.  This will be the Ravens’ 2nd time to the Super Bowl.  Not a bad record for a relatively new team.  The 49ers have been around since 1946, a whopping 50 years longer than the Ravens.  The 49ers have won 5 Super Bowls in their history.   Should be a good game. 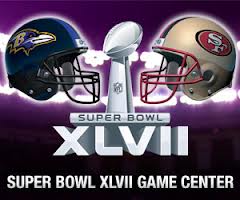 Personally, I would like to see the Ravens win on Sunday.  I am a diehard, through and through Washington Redskins fan.  But since my boys didn’t make it to the big show this year, I will root for the Ravens, since they are a Maryland team.  I also feel that the Ravens have so much heart and determination to take it all the way.

Super Bowl Sunday is one of those days, kinda like New Year’s Eve and St. Patrick’s Day, where you feel like you have to do some sort of partying and celebrating, even if your team isn’t playing in the game.

So whether you’re just staying home, or having a huge blowout party, or going to a party and need to bring something, the first order of business is food and drink (beer goes without saying).  Ya gotta eat and ya gotta wash it down with something.  I did a search on Pinterest and found some really good looking football food recipes.  Just click on the colored links under each picture to get each recipe.

Can’t watch football without some crackers and cheese.  And what better way than to have a football shaped cheese ball.  This recipe is courtesy of Party City.

Another recipe from Party City is the trusty go-to, pigskins in a blanket.  Yum!

Another party staple is good ole deviled eggs.  Personally I don’t like the fancified deviled eggs with extra ‘stuff’ in them.  This recipe makes them straight-up – just the way I like them.  Thanks to skinnyms.com for the recipe!

A  football food regular in my house is chicken wings.  I decided that since many people will be at parties, socializing with other people, they might not want to be sitting there gettin down and dirty with some greasy chicken wings.  This recipe is the next best thing.  Chicken Wing Dip from Food.com.  Yum-may!

You just can’t sit and watch an entire Super Bowl without eating some nachos.  It’s just what you do.  Found this amazing looking nacho recipe from a site called A Night Owl.  Yes please!

And you gotta have some veggies and dip on hand, especially when the game is close and you need something to crunch on to keep your nerves down.  This Delicious Dill Vegetable Dip comes from a site called Little Yellow Barn.

Now for the beverages.  This recipe is for all of the Ravens fans out there.  This drink comes from a site called SingleMindedWomen and is called Raven on the Rocks.  Looks really refreshing!  All it calls for is UV Grape (I’m assuming that’s grape flavored vodka), lemon-lime soda, and a splash of sweet and sour mix.  Please and thank you!

And being that this year’s Super Bowl will be taking place in New Orleans right around Mardi Gras time, what better drink recipe to make than the Housewives Hurricane!  Brought to you from yours truly, the Housewives of Frederick County.

So with all of these recipes, you should be more than set for eating and drinking while watching the Super Bowl at home or at somebody else’s house.

BUT, if you feel like getting out of the house and don’t have somebody else’s house to go to, here are some local places right here in Frederick County that are hosting Super Bowl parties and specials:

This is all I could find online, but if you know of any other Super Bowl festivities going on in the Frederick County area, which I’m sure I’ve just touched the surface, please comment and we’ll add it to the list.

Have fun on Super Bowl Sunday and Go Ravens!!!