This recipe for Fried Brussels Sprouts, or Bruksel Lahanasi, is an absolute favorite of ours as well as most Fredericktonians.

We were introduced to this recipe several years ago when we first dined at one of our all-time favorite restaurants, Ayse Meze in Downtown Frederick.

In spite of the fact that they were hugely popular, Ayse Meze sadly closed their doors earlier this year.

However, lucky for all of us, they offer their brussels sprouts recipe on the menu at one of their sister restaurants, Pistarro’s Ristorante Pizzeria Napoletana.

In addition, if you want to make them at home, now you can! 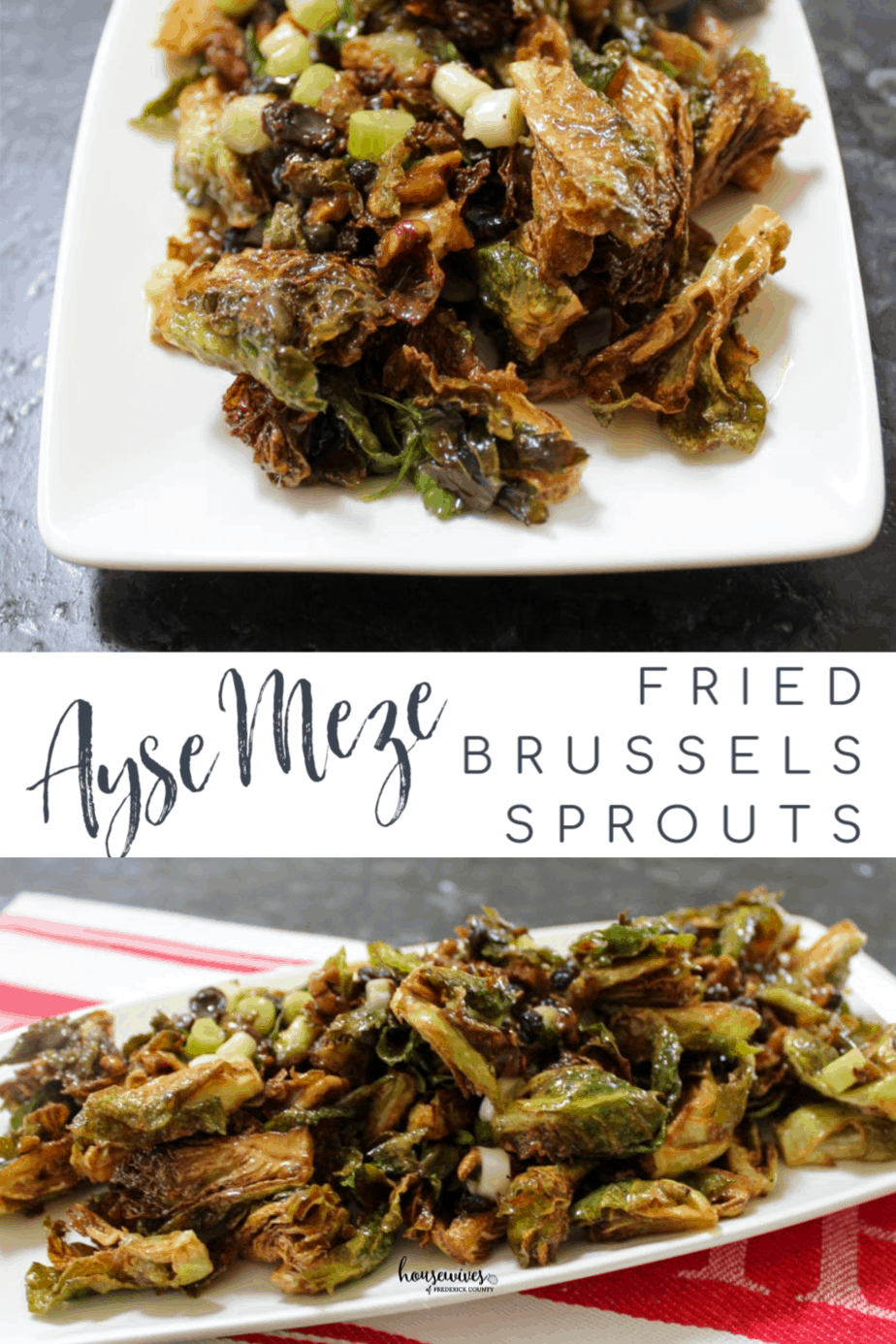 Whenever we dined at Ayse Meze, we always ordered the brussels sprouts appetizer.

It was just a no-brainer.

Admittedly, it was our main reason for going there!

Although their entire menu was amazing, the brussels sprouts were the main draw for us.

How We Got Our Hands On The Recipe

Terri and I became friends with the owner of Ayse Meze a few years ago when we held our Sparkle & Spirits event at his restaurant.

Unquestionably, Nezih Pistar is the nicest guy you’ll ever meet and was so gracious with us!

Needless to say, our event far exceeded our expectations and we have Nezih to thank for that!

So, when we found out that Ayse Meze was closing, we were seriously bummed.

Fast forward a few months, we decided we were just going to go for it and ask Nezih for his famous brussels sprouts recipe.

All he can do is say no, right?

Obviously, we were super excited when he responded with a copy of Ayse’s menu showing the exact recipe.

Now we can finally make this amazing dish at home!

I’m going to take you through the steps for making this recipe.

Then, I will post the recipe for you to print out so you can try it for yourself!

Mix all of the ingredients together in a large bowl.

Then pour it into blender and blend well.

I used my NutriBullet (Amazon) which was the perfect size.

Oh, and by the way, when following Ayse’s recipe, the dressing will be enough to make 6 to 7 ‘orders’ worth.

An ‘order’ feeds about 3 people as an appetizer or a side.

So, if you don’t plan to make more than one ‘order’, make less dressing.

Pour your dressing from the NutriBullet into a dressing bottle like the one pictured.

I used my Mom’s salad dressing bottle. Reminds me of her.

But if you’re in the market for a good salad dressing bottle, this OXO Good Grips Salad Dressing Shaker (Amazon) is perfect for this vinaigrette recipe.

Second, wash and dry your brussels sprouts with a towel or paper towel.

The reason for drying them is because they contain a lot of water content which increases the splashing in a deep fryer.

Then, cut the ends off of the brussels sprouts and cut them in quarters, lengthwise.

After that, place the cut brussels sprouts into your heated up deep fryer.

I borrowed Terri’s deep fryer but if you’re in the market for a deep fryer, I found this Presto GanPappy Deep Fryer on Amazon with great reviews!

Cook for approximately 5 minutes or until they’re a nice golden brown on the edges.

Third, while your brussels sprouts are cooking, toast your chopped walnuts in a 350 degrees fahrenheit oven for 10 minutes. 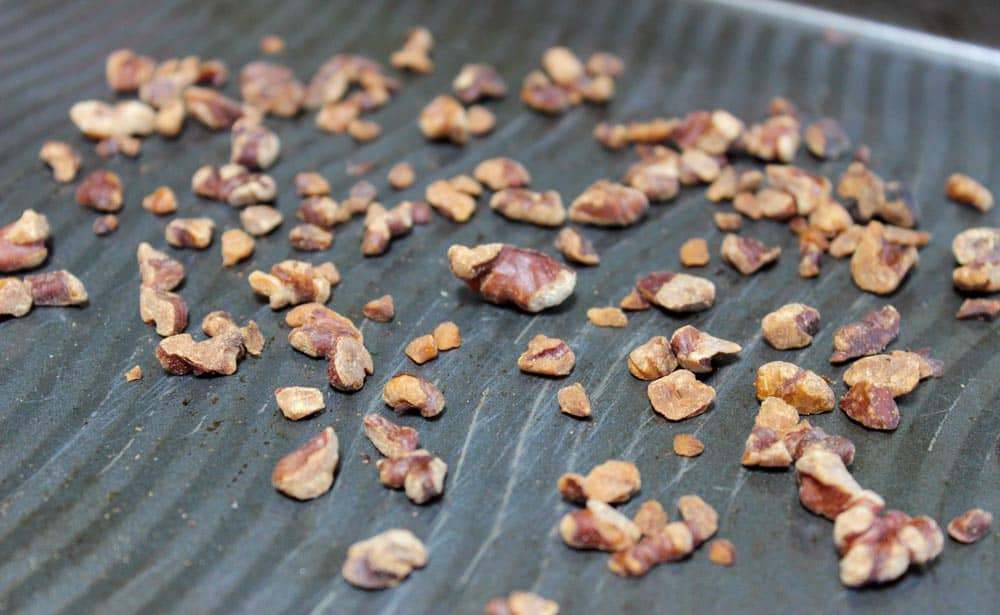 Set aside the walnuts, currants (I found them at Wegmans) and sliced scallions. 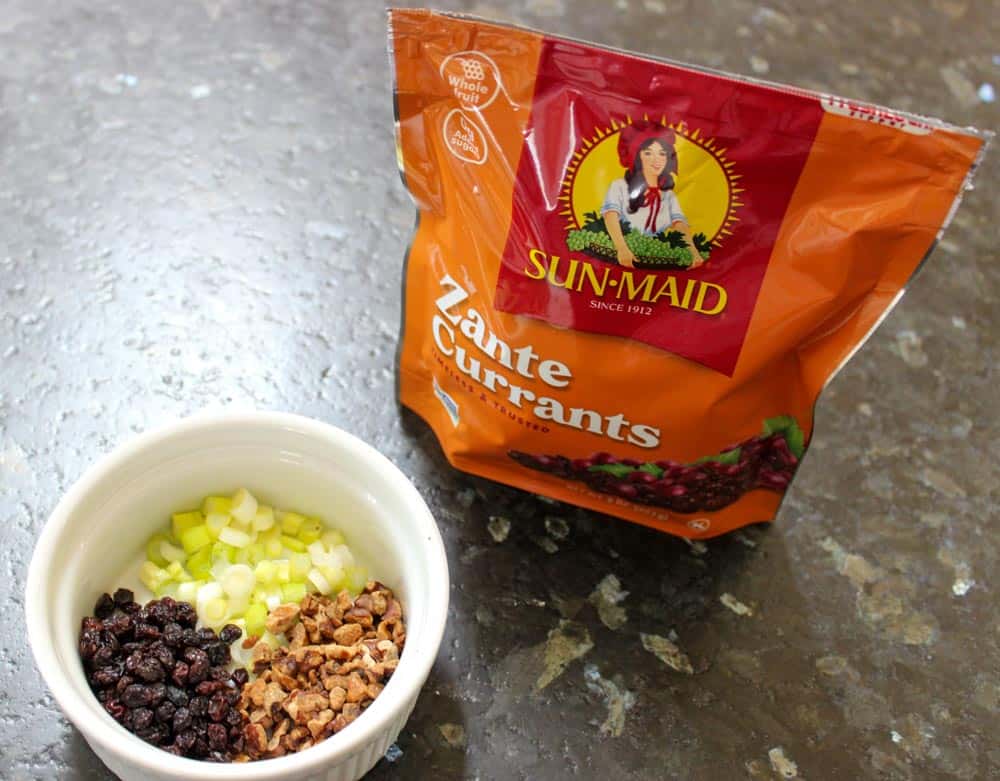 Fourth, measure out the capers and parsley leaves and saute in a frying pan for 1 to 2 minutes. 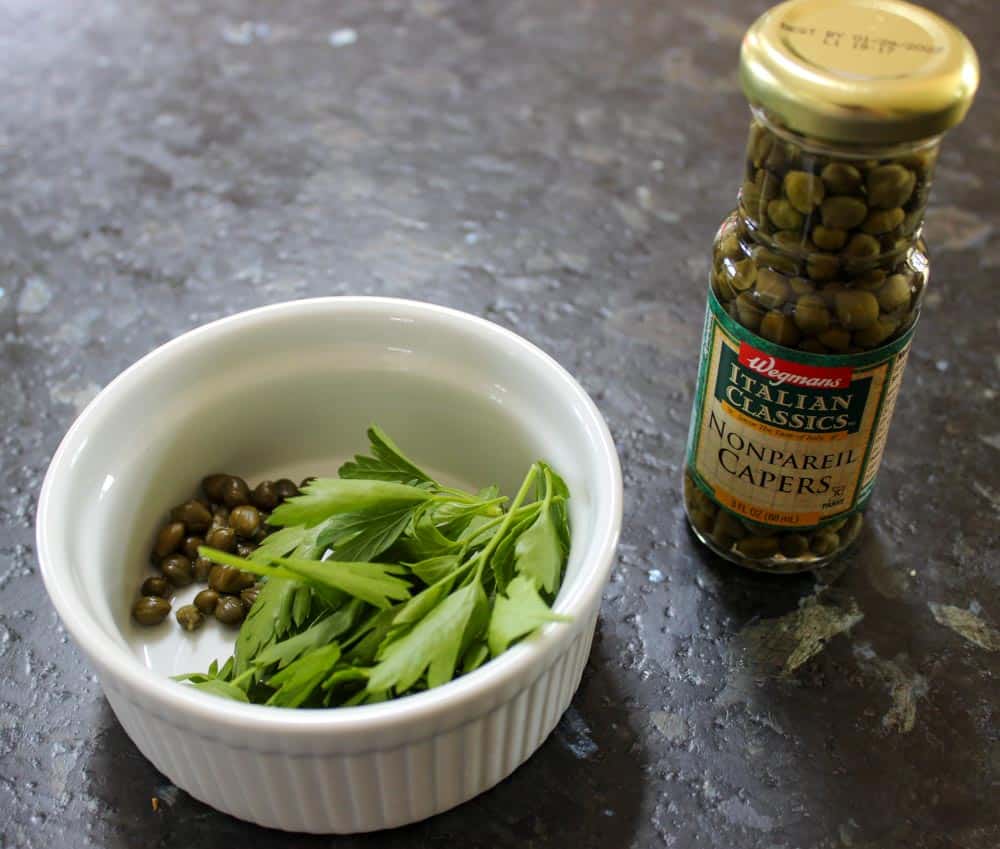 I just used Pam cooking spray to saute these ingredients. 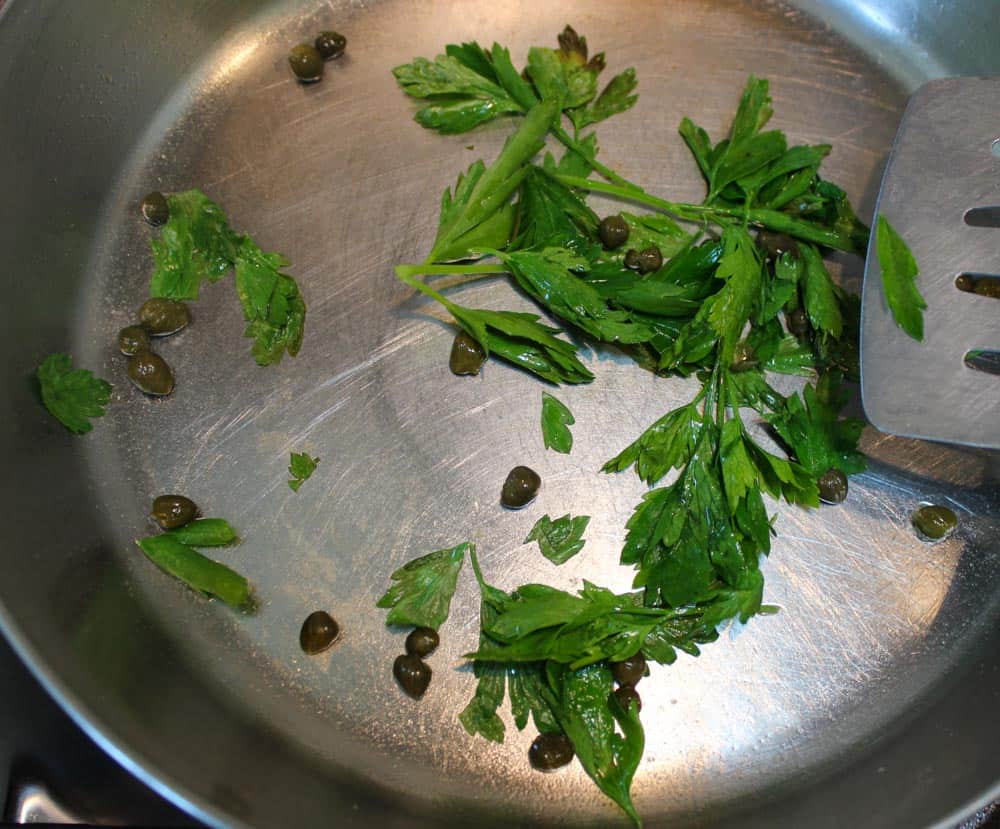 Finally, add everything to a large bowl and mix well with a large spoon. 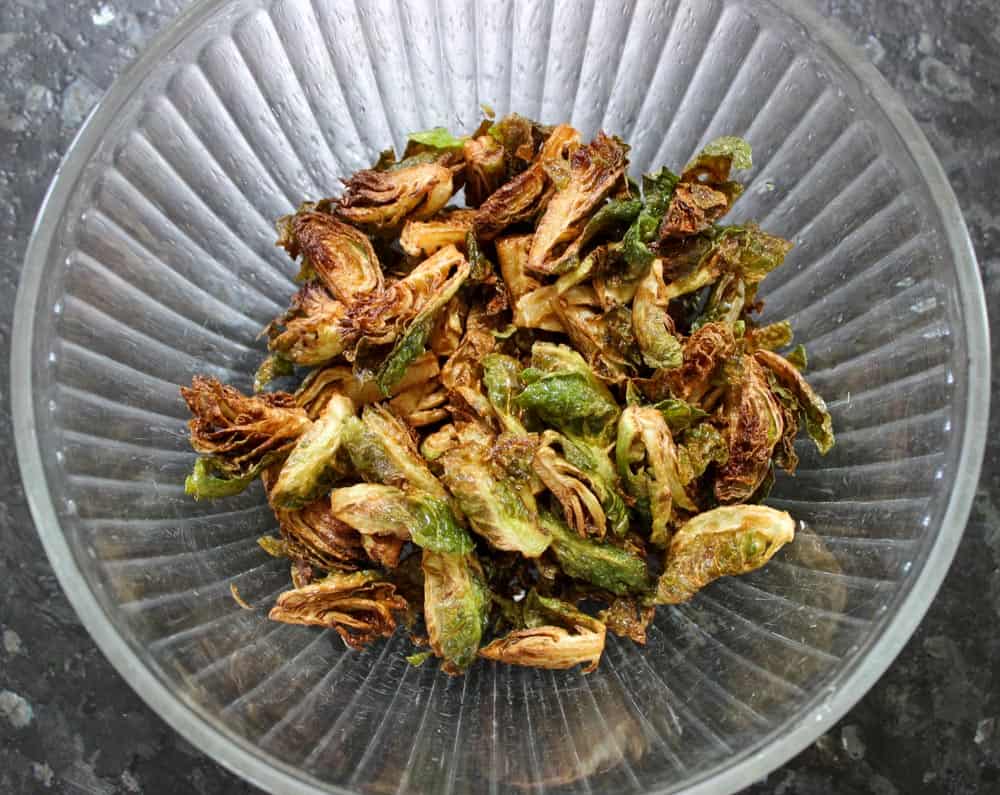 Once all of the ingredients are added to the bowl, toss in the vinaigrette a little bit at a time until the brussels sprouts are lightly coated. 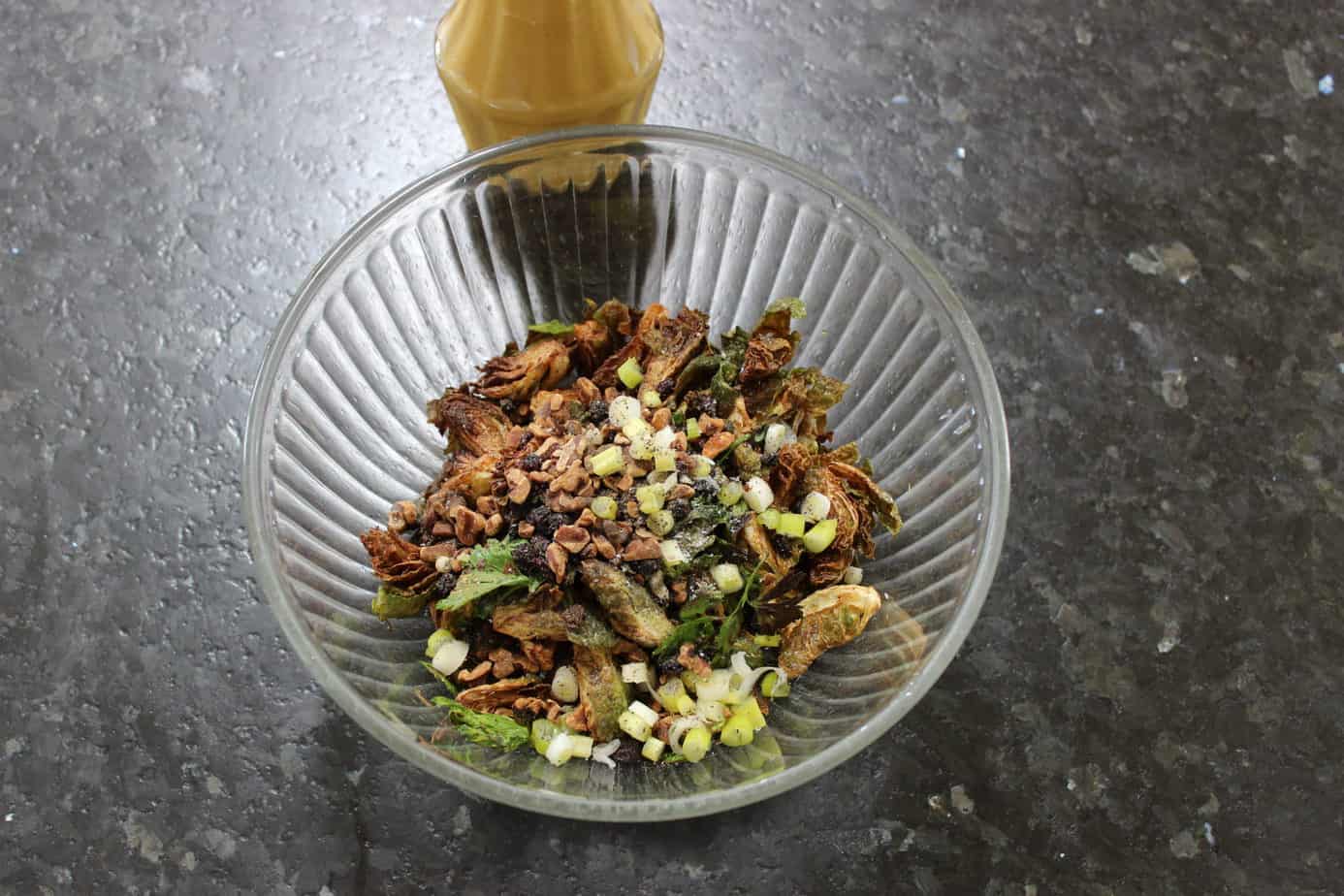 Then place your creation onto a nice serving dish and enjoy! 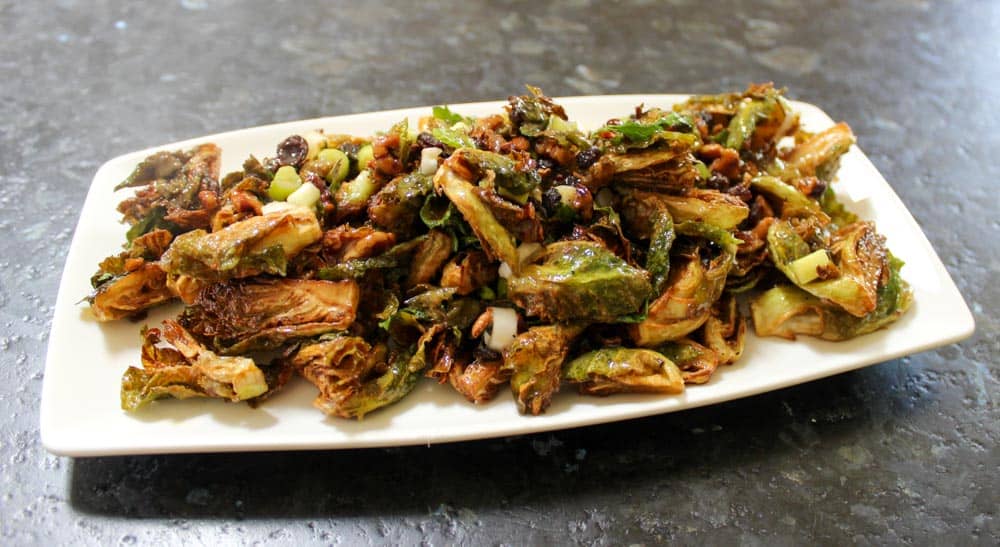 You guys!! These fried brussels sprouts are heaven on a plate!

Just taking a bite will transform you to another dimension.

The combination of the currants, scallions, toasted walnuts, capers and parsley are exquisite along with the fried brussels sprouts and vinaigrette dressing. 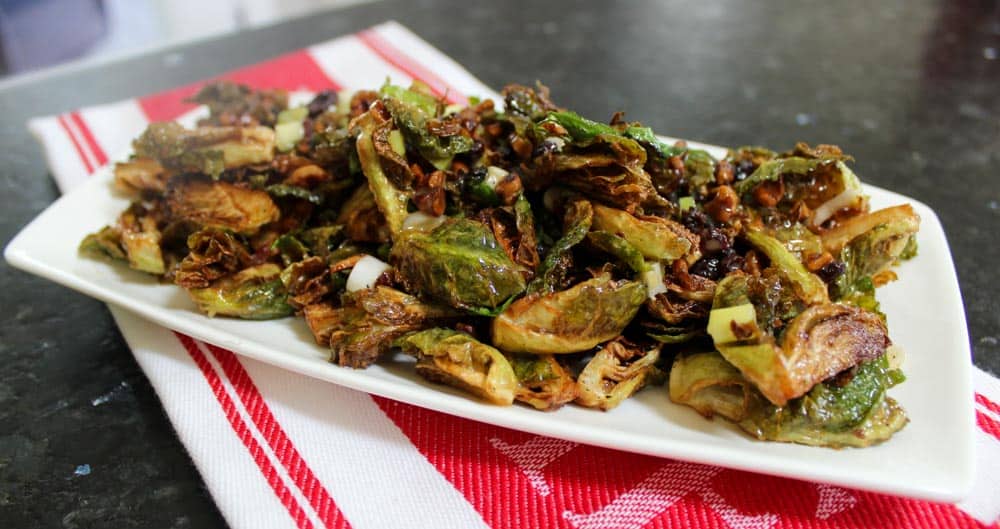 Also, if you don’t want to use a deep fryer or deep fry the brussels sprouts in a frying pan, you can use an air fryer.

You could probably even oven roast your brussels sprouts and prepare the recipe that way and they’d turn out awesome. 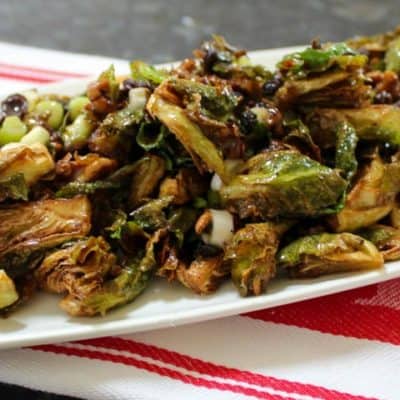 Not gonna lie, I was pretty nervous to attempt to recreate this legendary recipe.

BUT, it turned out amazing!

I’m so happy I tried it!

Let us know if you make it and how you like it.

Just for old time’s sake, here’s a copy of the original recipe: 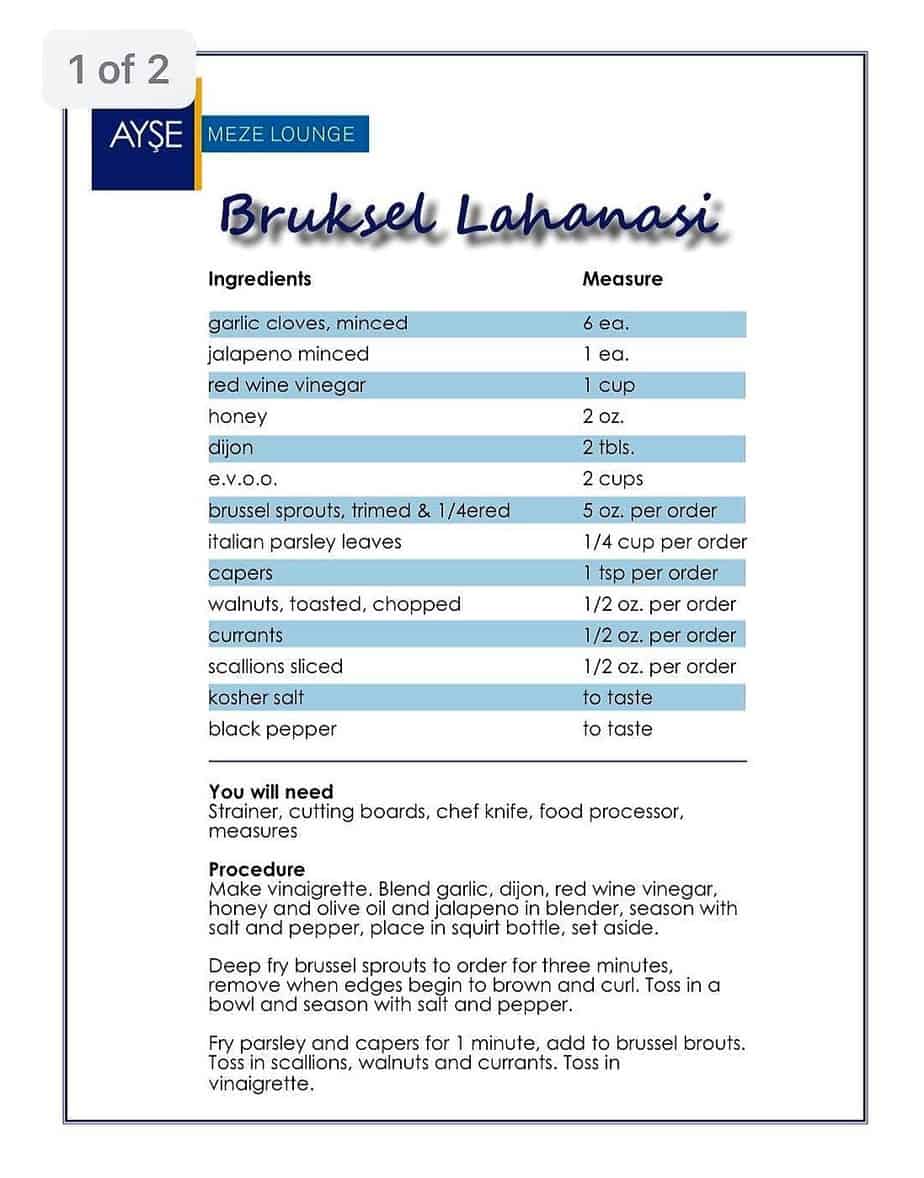 In the meantime, click on over to some of our other appetizer recipes here: