So, I decided to one-up Chick Fil A nuggets by creating my very own recipe using the nuggets and turning them into delicious appetizers!

So, here is a semi-homemade recipe that I put together, with the help of my friends and family (particularly my nephew Austin), using Chick Fil A chicken nuggets.

Semi-homemade means that you skipped some steps by buying something already made and then adding to that already-made item.

Hence, it saves so much time without skimping on the taste!

We ‘Mom Bloggers’ are approached with opportunities to express our opinions regarding different brands.

It’s so much fun!

And, hey, we mommas totally know what we’re talking about!

So when I was chosen along with a little over 200 other ‘Mom Bloggers’ across the country to be a part of the annual Chick Fil A Mom Panel #ChickFilAMoms, I was totally ecstatic!

Ask Terri. I really was beside myself.

We get to give our opinions on topics that Chick Fil A wants to know about regarding what our kids like and what we like as well.

We were recently given a challenge to “Dress Up Your Nuggets” and share our recipes with our readers.

At first I really wanted to go with the holiday theme by involving something cranberry related.

I got some Orange-Cranberry Chutney and chopped walnuts, sliced a Chick-Fil-A chicken nugget in half, spread the chutney and sprinkled the walnuts, added the other chicken nugget half on top, and stuck a toothpick through it.

It was really very good!

But after getting others’ opinions, the overall consensus was that these Bacon, Cheese, & Mushroom Chick Fil A Chicken Nuggets would appeal to a larger audience.

Chick Fil A Nuggets get dressed up for a party!

I will take you on a little step-by-step photo journey of how to make them.

The printable recipe will be at the end of this post. 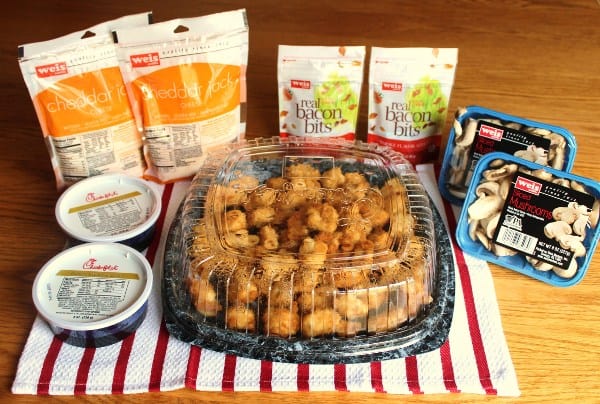 Then spread out the chicken nuggets onto the cookie sheet. 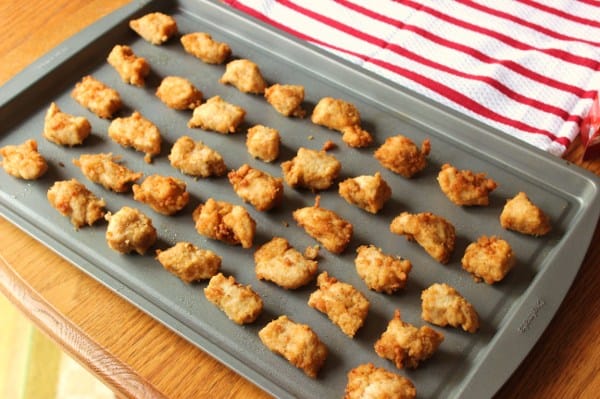 In the meantime, add a tablespoon of butter to a frying pan over medium heat.

After the butter melts, add the sliced mushrooms and about 1/4 cup of water and let the mushrooms cook until they are soft.

Should take about 10 minutes or so.

Then drain the mushrooms. 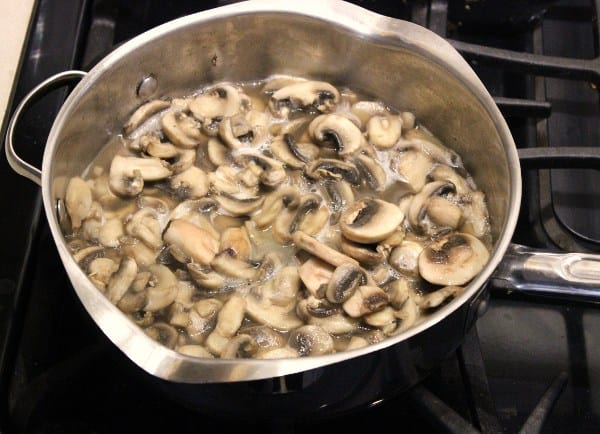 Place one sliced mushroom onto each chicken nugget. 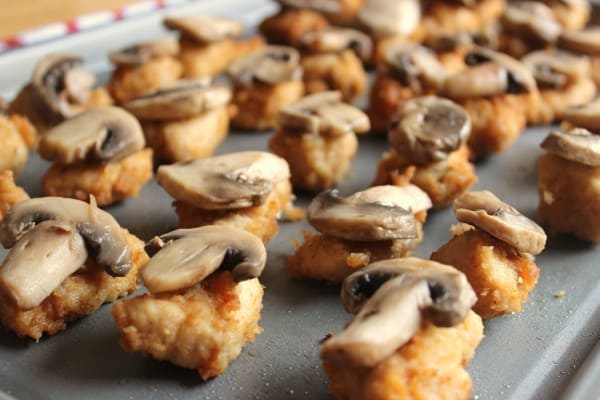 Sprinkle the shredded cheese evenly over all of the chicken nuggets. 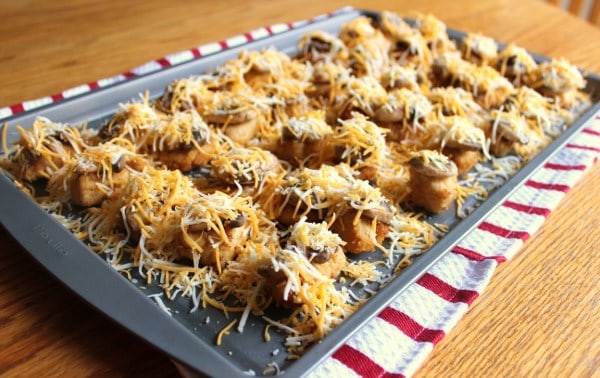 Sprinkle the real bacon bits evenly over top of the cheese. 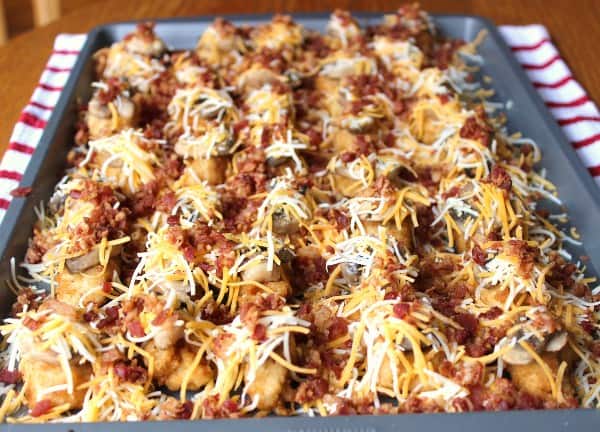 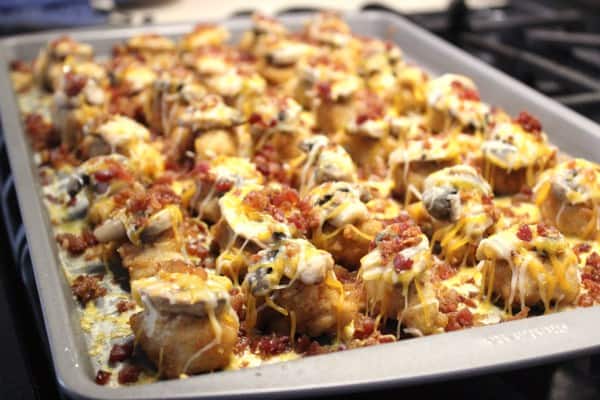 Melted cheese will be all over your cookie sheet, but because you used cooking spray, it is very easy to lift off.

Use a small cookie spatula to lift the nuggets off of the cookie sheet and onto your serving platter. 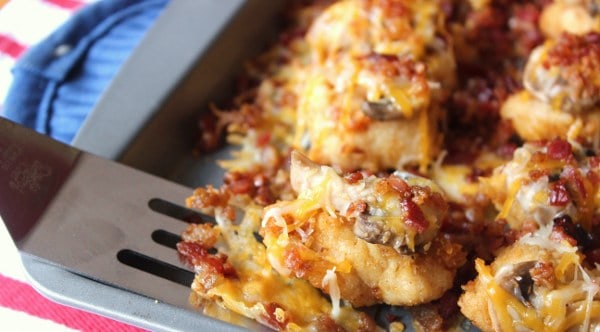 Pour the honey mustard sauce into a dipping bowl.

Stick a toothpick through each chicken nugget. 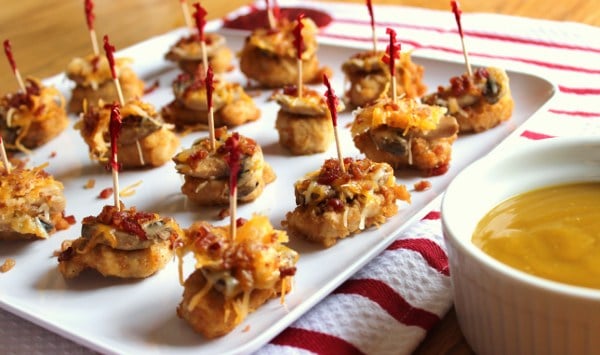 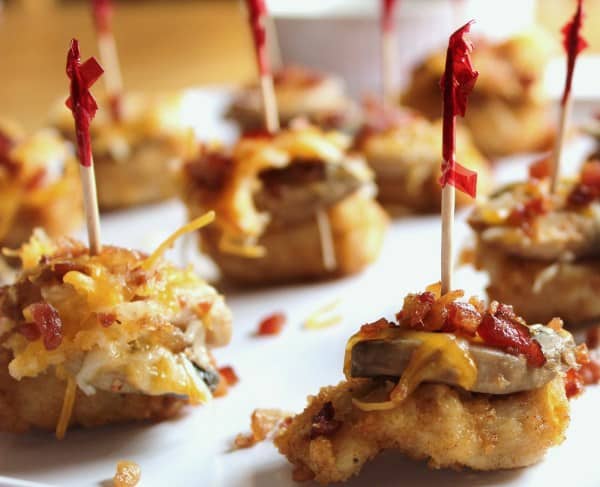 My husband totally ignored my pleas to wait until I was finished taking pictures before he dug his hands into these chicken nuggets and began eating them.

Clearly, they were so delicious! 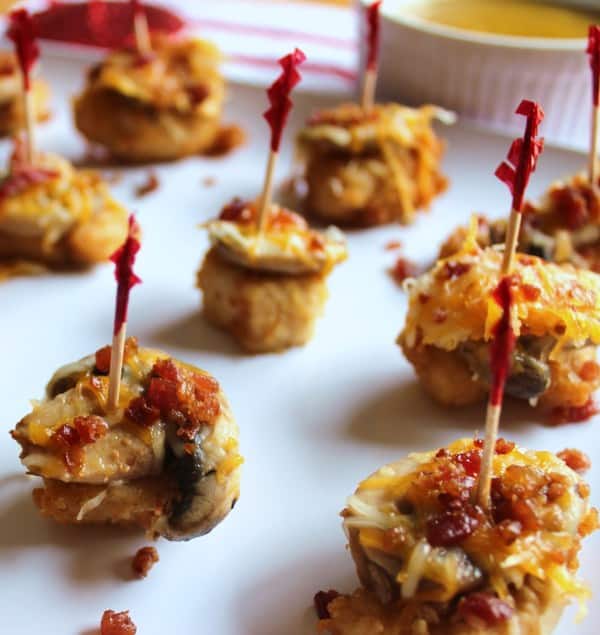 If I had more time, here are some changes I would make:

These changes would have kept most of the cheese and bacon on the nuggets while cooking.

But if you’re short on time, like I usually am, shredded cheese and bacon bits are absolutely fine to use. 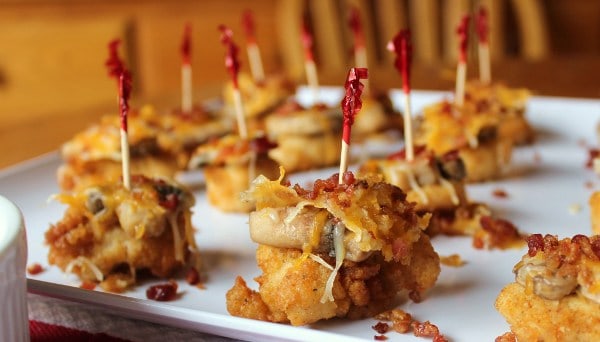 I also think that next time I will add sliced spring onions on top of the nuggets.

That would give it a little bit of a crunch and added flavor. 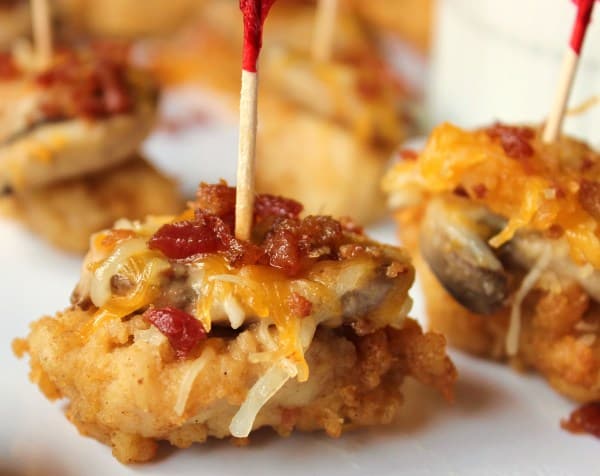 The combination of the delicious Chick Fil A nuggets with the sliced mushrooms, cheese, and bacon was heaven on a toothpick. 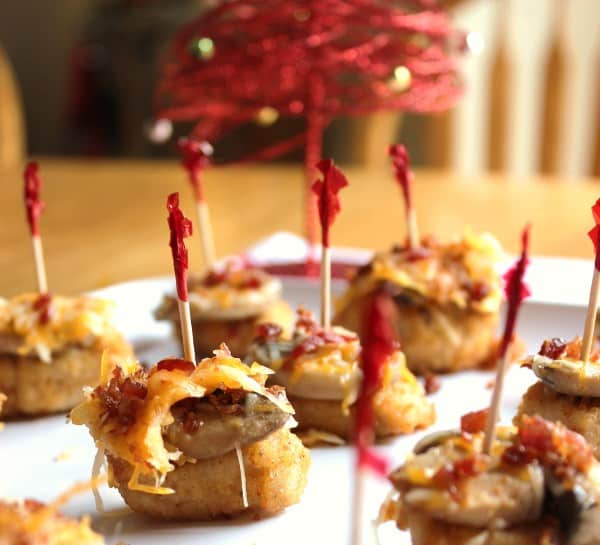 I would consider this a relatively heavy appetizer.

Eat 2 or 3 and you’re pretty satisfied. 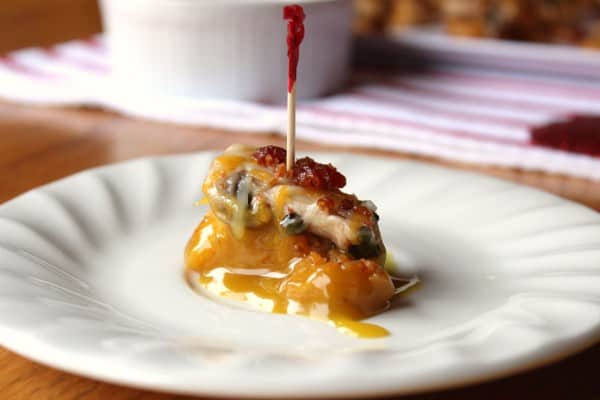 And here is the final product after being dipped in the honey mustard sauce and ready for me to eat.

My pictures were taken and it was now time to enjoy the fruits of my labor. 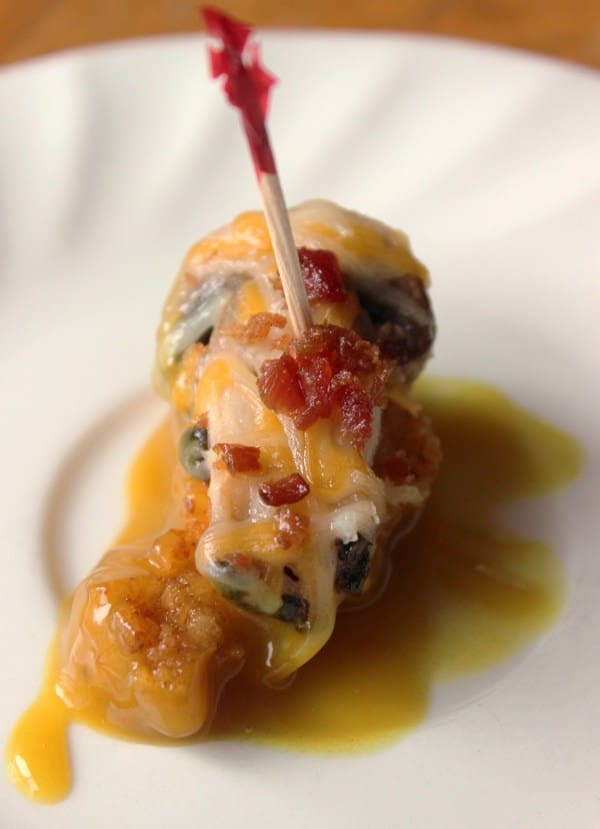 This would be the perfect appetizer to bring to a holiday party or even to serve at home on a football Sunday.

Thank you Chick Fil A for inspiring me to think out-of-the-box and come up with this recipe.

Oh, and thank you to my nephew Austin, who is the most creative teenager I know.

Finally, here is the Bacon, Cheese, & Mushroom Chick Fil A Nuggets Recipe for your printing pleasure: 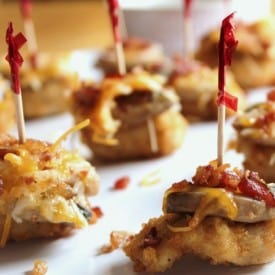 Kitchen supplies that you will need for this recipes are: 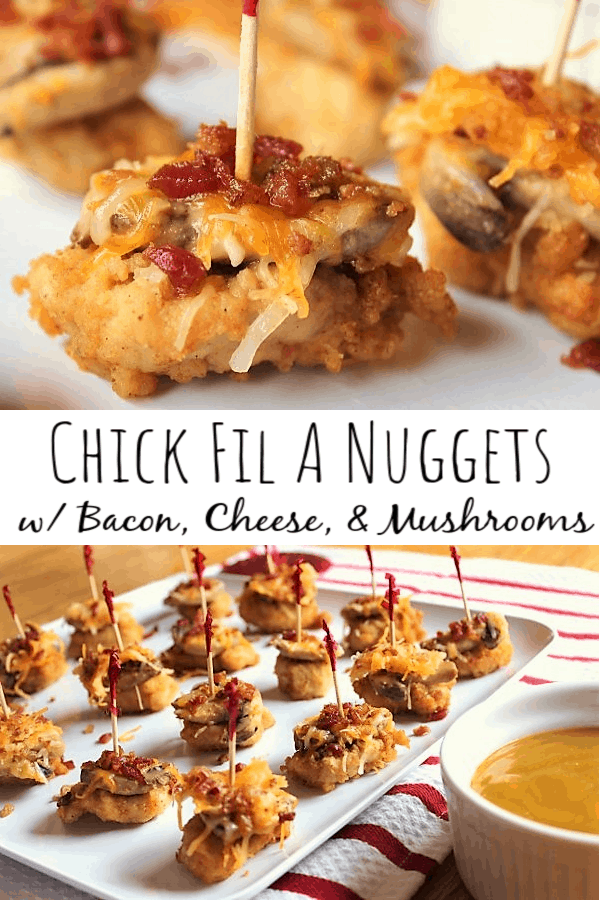