This easy-to-make, mouthwatering recipe for homemade cinnamon muffins is a tried and true breakfast choice that you can whip up in no time!

Needless to say, muffins are the perfect choice for that first thing in the morning, quick breakfast.

Grab your morning cup of coffee and a couple muffins and you’re good to go!

Typically when I make muffins, I go straight for my Banana Bread Muffin recipe or these heavenly Chocolate Chip Muffins!

However, if any muffin recipe could be the easiest one of all, without sacrificing that “these are amazing” factor, it would be this cinnamon muffin recipe.

One of the beauties of this great recipe is that it only requires ingredients that I guarantee you already have in your pantry and refrigerator.

How To Make Cinnamon Muffins

This simple recipe is so easy to make, it’s almost embarrassing.

However, the end result is so delightful that I don’t care how easy it is to make them!

So go ahead and make a double batch of them. I promise, you will be glad that you did!

As a matter of fact, if I can compare the taste of them to anything it would be snickerdoodle cookies.

Snickerdoodle cookies have just the right about of cinnamon, sugar, and crispness to make the perfect combination for your taste buds.

Same goes for these cinnamon sugar muffins except that they’re crisp on the outside and moist on the inside.

First, melt 6 tablespoons of butter and pour into a large mixing bowl.

Then, add 3/4 cup of granulated sugar to the melted butter and whisk together until completely combined.

Second, add 2 eggs and 1 teaspoon of vanilla extract to your mixture.

Again, use your whisk to blend well until the mixture is thoroughly combined.

This is where you’ll need to replace your whisk with a strong, large spoon and really put some elbow grease in it in order to mix the batter completely.

OR you can use your stand mixer to make it easier on your mixing arm.

In a small bowl, mix together your cinnamon and 3/4 cup of sugar.

The reason that this is a separate step is because you want to add in the cinnamon sugar mixture to your batter to form a ribbon or swirl effect.

In any event, whether you blend in the cinnamon sugar completely OR mix it just enough to make a ribbon effect, these muffins will taste just as good.

You can also set some of the cinnamon sugar mixture aside (about 1 teaspoon cinnamon & 1 teaspoon sugar) to sprinkle on top of your muffins for that golden brown, crisp top.

However, sometimes having that extra visual swirl effect can make them more interesting!

This recipe makes 12 fluffy muffins, so use a standard muffin tin – one 12-muffin tin or two 6-muffin tins.

Be sure to grease your tins liberally to ensure that your muffins don’t get stuck to the pan after baking.

OR you can use the disposable muffin cups or muffin liners.

Also, use a cookie scoop like the one pictured below to scoop out the batter and place into your muffin pan.

Place muffins in a preheated 400 degrees Fahrenheit oven and bake for approximately 20 minutes.

Be sure to use a toothpick to insert into a muffin to make sure they are baked through before removing them from the oven.

First of all, the star ingredient, cinnamon does have some great health benefits according to this Cleveland Clinic article:

However, eating cinnamon muffins on their own as a meal are probably not the healthiest breakfast you can eat.

On the other hand, they’re not terribly unhealthy either.

As a matter of fact, if you serve these delicious muffins as a side to go with healthy breakfast items like eggs and fresh fruit, you can absolutely consider it a healthy and balanced meal!

I hadn’t made this cinnamon muffin recipe in a very long time, so when my husband and son could smell the amazing aroma in the house, they followed their noses to the kitchen.

Needless to say, it was all I could do to keep them from devouring the muffins before they even had a chance to cool off.

In addition, it’s no surprise at all that they both told me these are the best cinnamon muffins they’ve ever had.

Shh, don’t tell them how ridiculously easy they are to make!

You don’t have to refrigerate the muffins, but if you want to, they will last longer (about a week) than if you store them in room temperature (1 to 2 days).

To store your cooled muffins (that is, if you have any leftover muffins!) just place them in an airtight container or a large Ziploc bag. 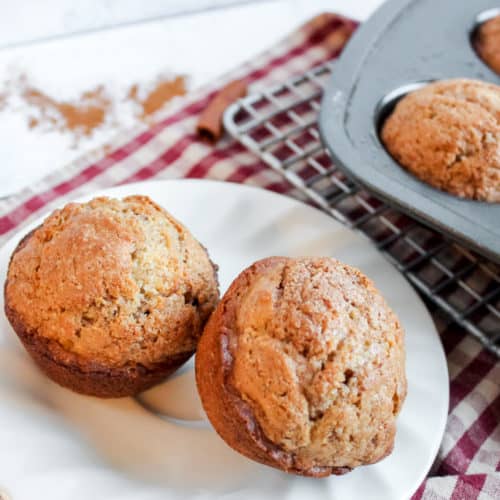 For more delicious muffin recipes, click on over to: