This easy Pumpkin Crunch Cake, {others call it Skullduggery Squares} recipe is so delicious and very similar to make as a dump cake.

It’s the perfect dessert to make during the Fall months when pumpkin pickin’ is prime!

However, you’re using canned pumpkin so technically you can make this Pumpkin Crunch Cake recipe all year round!

The Skullduggery name implies that this is a Halloween themed recipe.

Although when I looked up the definition of skullduggery, it means underhanded or unscrupulous behavior or trickery.

However, I’ve seen the word skullduggery used for names of Halloween pirate costumes and skull decorations.

In addition, it truly could just as easily be a Thanksgiving themed recipe because of the pumpkin involved.

What is Pumpkin Crunch Cake? 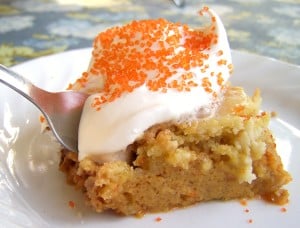 Not only because it tastes like pieces of pumpkin heaven on a plate, but also because it’s ridiculously easy to make.

Also, it’s a great alternative to pumpkin pie on Thanksgiving and Christmas Day.

Thank you to my friend Robin for introducing me to this recipe.

It can also be found on Amazon in the A Ghastly-Good Halloween by Gooseberry Patch.

This book has Halloween recipes, crafts, costume ideas, and decorations. 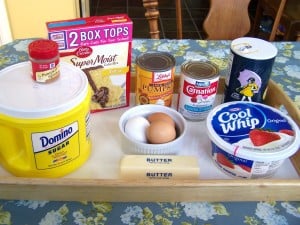 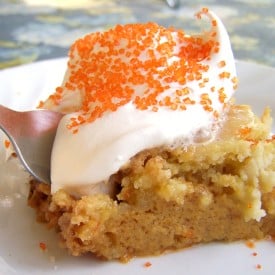 I could not find the nutrition information.

However, based on the fact that it contains an entire stick of butter and 1 cup of sugar, it is not something you’ll want to eat on a regular basis.

Hence, this would be put in the ‘special occasion treats’ category.

And after learning the definition of Skullduggery, I realized that if you really want to fatten up your skinniest friend underhandedly, this recipe would probably be a good start. 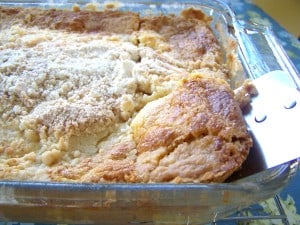 How Did It Taste?

This recipe was a hit with my son and my husband.

As I’ve mentioned in previous posts, they are both very particular about what they like and don’t like when it comes to food.

They REALLY liked this recipe.

The crusty top was so tasty and rich and the pumpkin filling was just like a good pumpkin pie. 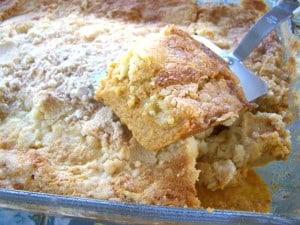 Based on other peoples’ reviews, adding chopped walnuts on top, before baking, would make it even tastier.

I will be sure to try that next time.

I would also think that vanilla ice cream would be a great alternative to whipped topping. 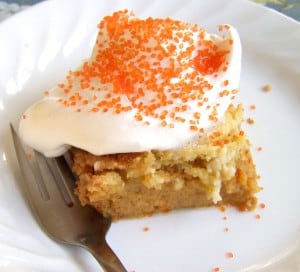 Try this at your next Thanksgiving gathering as opposed to the traditional, same old, humdrum pumpkin pie .

I guarantee you will be the new Skullduggery Square ‘go-to’ for all future gatherings.

Don’t go anywhere because we have more pumpkin recipes for you right here: 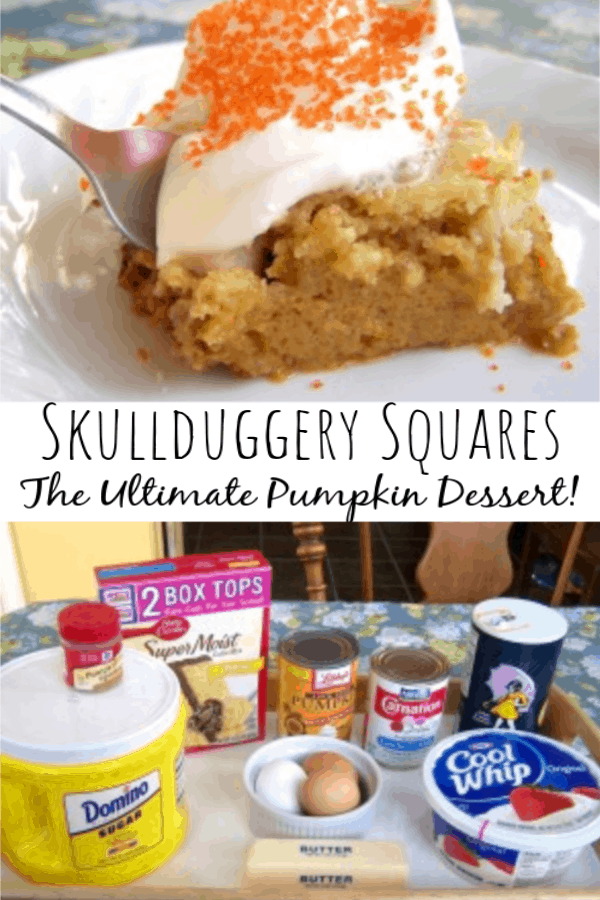