And the beauty of this method is that it doesn’t matter what the weather is outside or whether or not you have a good campfire going!

Needless to say, this is one of those dessert recipes you and the kids will want to make often. 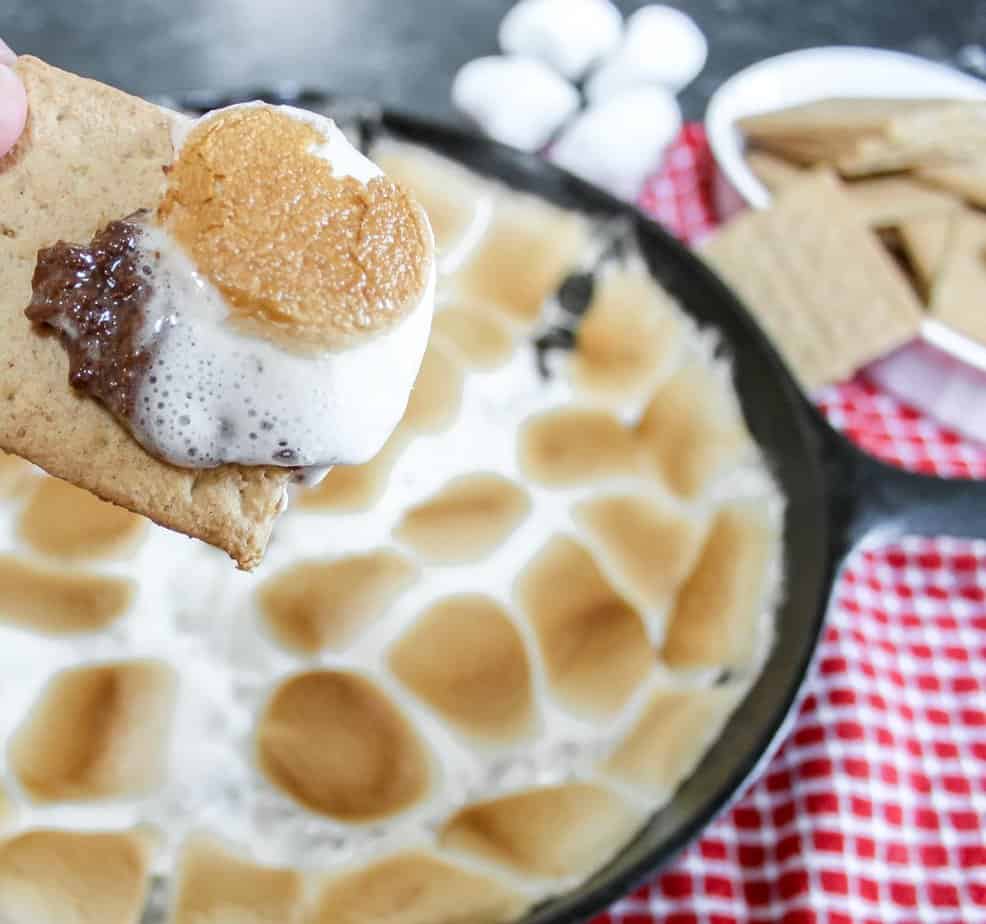 Can You Make S’mores Dip in the Oven?

You can absolutely make s’mores dip in the oven!

The technique is a little bit different but the end result is the same, if not better, than the traditional way to make s’mores.

I don’t know what it is about s’mores!

Whether it’s the perfectly toasted marshmallow, the melted chocolate, or the crispy graham crackers.

But there’s just something so special about them!

Why Are S’mores Called S’mores?

But first, why are s’mores called s’mores?

Well, if you’ve never had them, try to eat just one!

After you eat your first one, you’re absolutely going to want some more!

Get it? S’more is slang for “some more”!

And because you’re most definitely going to eat more than one, the plural form of the word is used: S’mores.

There are multiple ways you can make s’mores.

However, the traditional way is to get a long stick and put a marshmallow on the end of it.

Roast the marshmallow over a campfire until it gets nice and toasty on the outside and warm and gooey on the inside.

It is at that moment that you:

See, s’mores is a WAY easier name for the whole process! 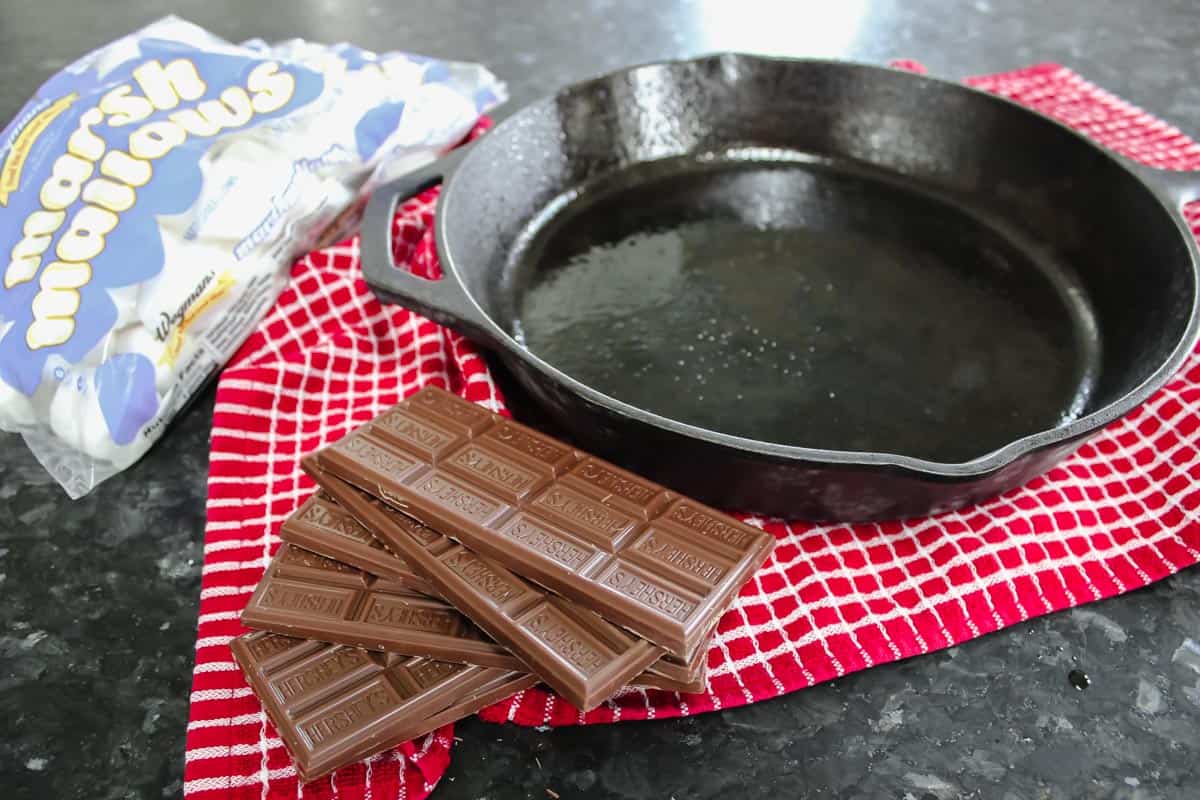 As the years have gone by, people have gotten very creative with making s’mores.

It’s no longer necessary to have a campfire at the ready under a moonlit, starry sky.

As a matter of fact, with this s’mores dip recipe, you can make them any time you like: day or night, rain or shine!

The prep time is basically less than one minute!

It’s so darn easy, that it only requires 4 extremely simple steps & 4 ingredients.

How To Make S’mores Dip

I used spray Pam (no, it’s not because my name is Pam).

However, I’d highly recommend using melted butter in your skillet.

Although I sprayed my cast iron skillet generously, there was still some melted marshmallow that stuck to the pan.

Step 2: Break Up Chocolate Bar Into Small Pieces & Spread in Even Layer in Skillet 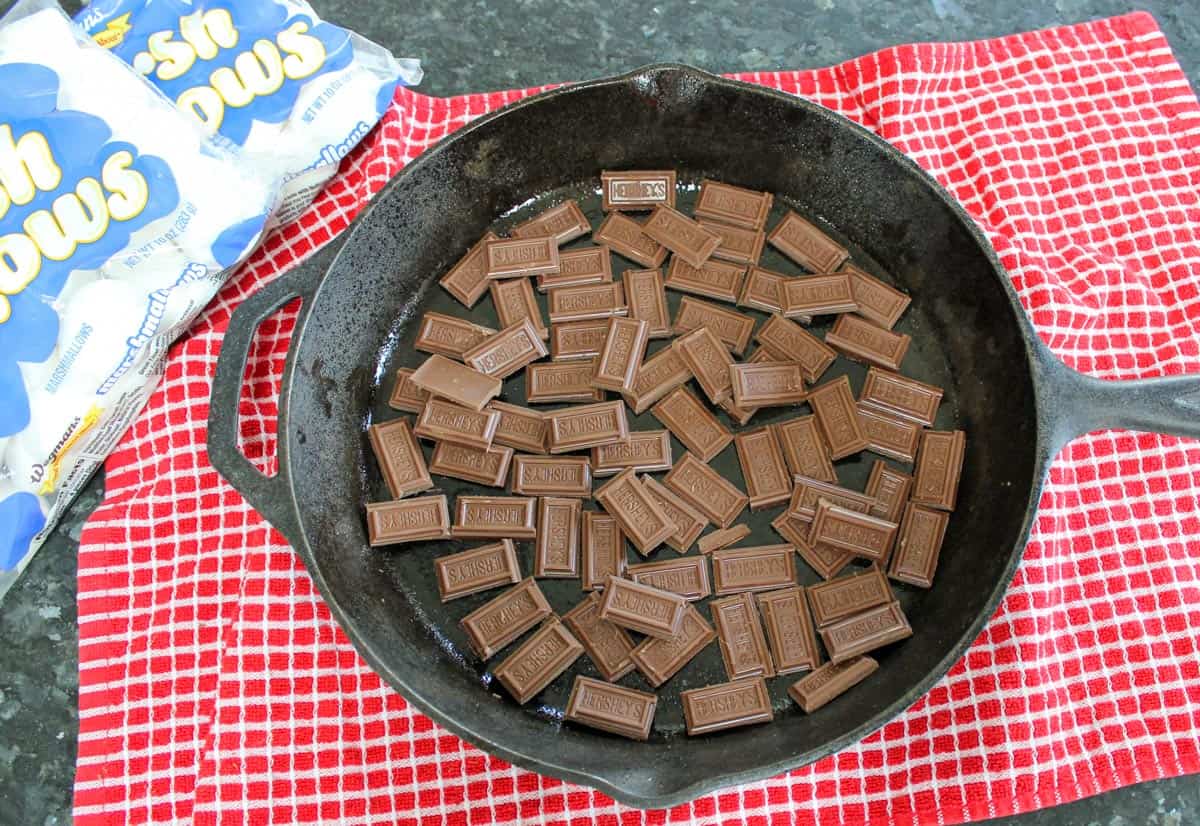 This step is very self-explanatory and super easy.

As a matter of fact, involve your kids in this step.

Just make sure they’re not sneaking a square or two in their mouths during the process!

Well, heck, that’s part of the fun of it, so go ahead and let them! 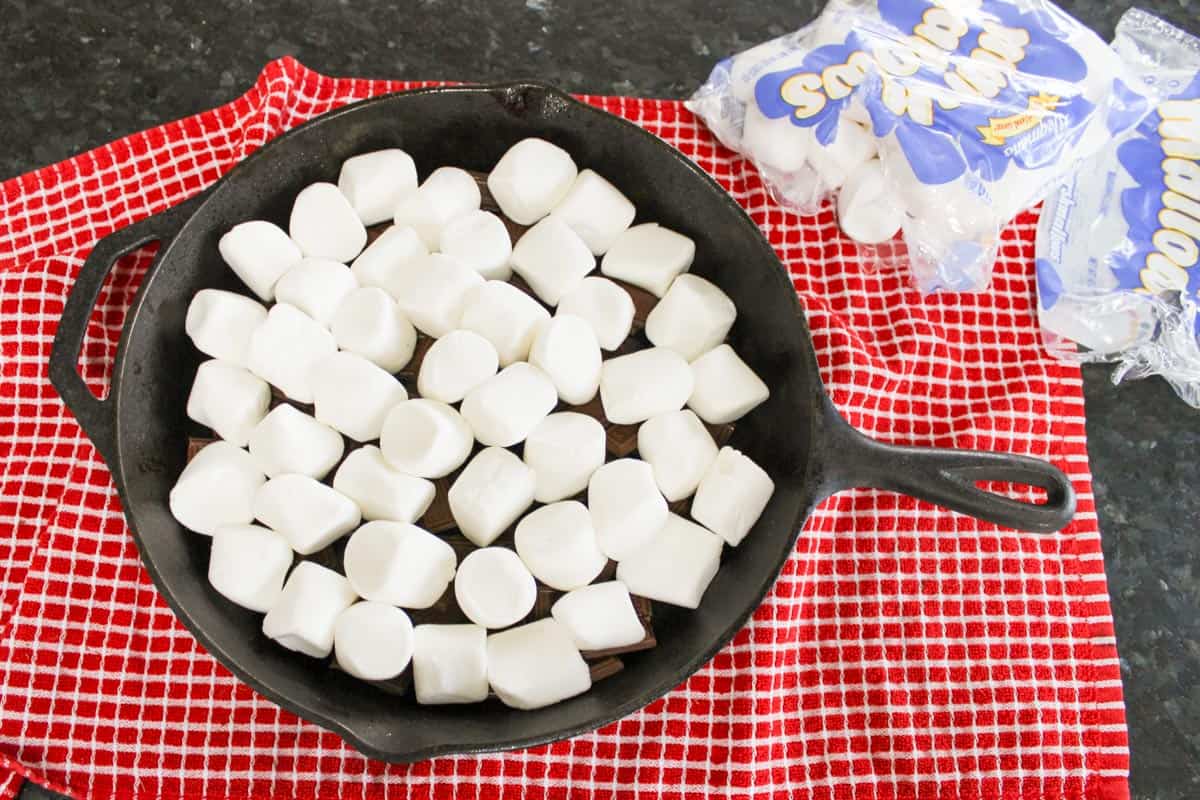 Again, it’s self-explanatory and a super easy step that the kiddos can handle.

And, popping a marshmallow or two in their mouths while they’re doing this step isn’t going to hurt anyone! 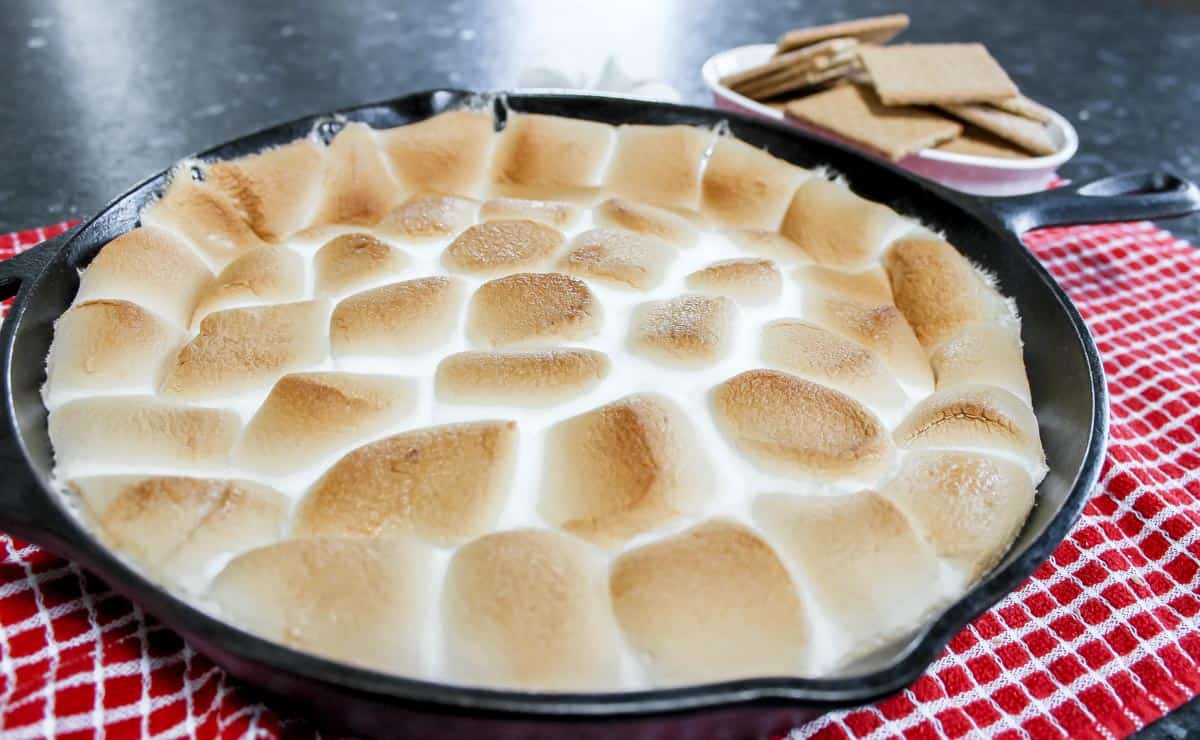 Because of the hot oven and the heavy cast iron pan, this is where you come in!

I don’t recommend that the kids be involved in this step.

In addition, be sure to keep an eye on the marshmallows while the s’mores dip is baking in the oven.

Depending on your oven, it can heat up and even burn the top of the marshmallows quicker than you’d expect.

How Long Does S’mores Dip Go in the Oven?

Well, with my oven, it took approximately 14 minutes for the top of the marshmallows to get that nice toasted brown top!

Using oven mitts, (again, leave this step to an adult) very carefully remove the skillet from the oven and place onto a trivet, a thick potholder, or your stove top to cool for 5 minutes.

After the 5 minute wait, you may then serve it up!

Just be careful, because you might get knocked over and pushed aside as everybody grabs their graham cracker and begins digging in!

As you can see, you can’t get a more perfectly toasted marshmallow atop a beautifully melted hunk of chocolate. 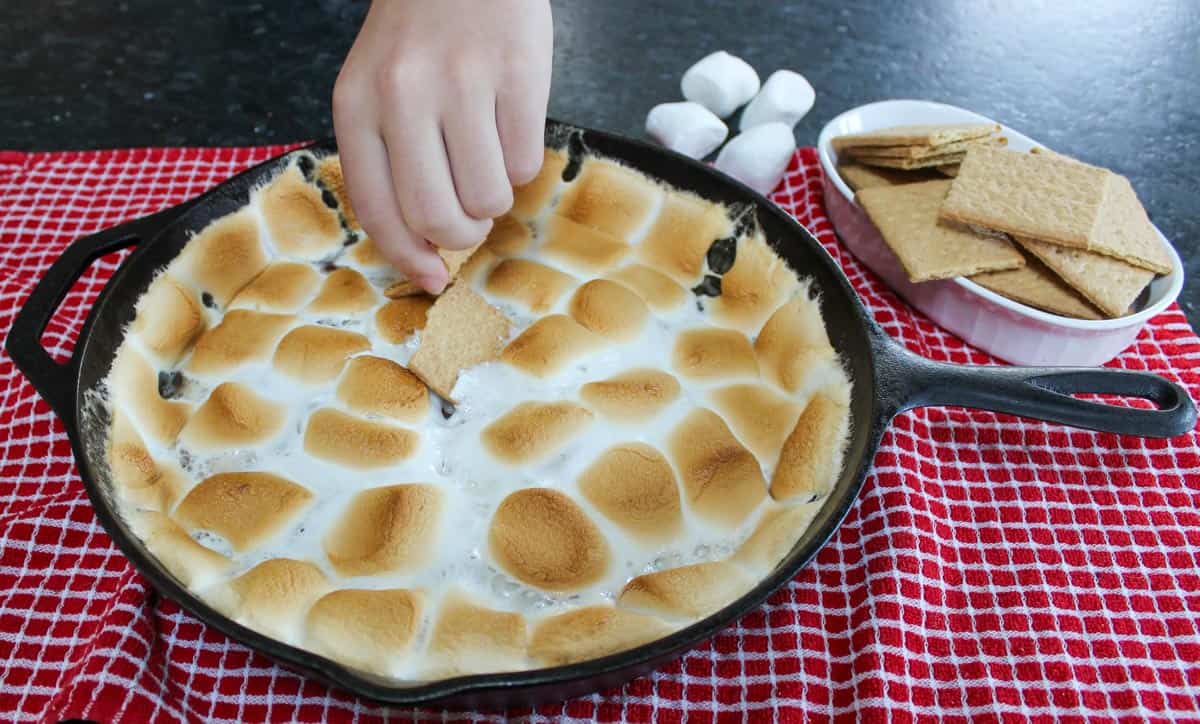 What To Serve with S’mores Dip

Can You Reheat S’mores Dip?

Keep in mind that eating this s’mores dip fresh out of the oven is the best way to eat it.

And, believe me when I say, leftovers may not even be an issue because it will likely get eaten up quickly.

However, if you do need to reheat this s’mores dip for any reason, just stick it back in the oven on 350 degrees Fahrenheit for around 10 minutes to heat it through. 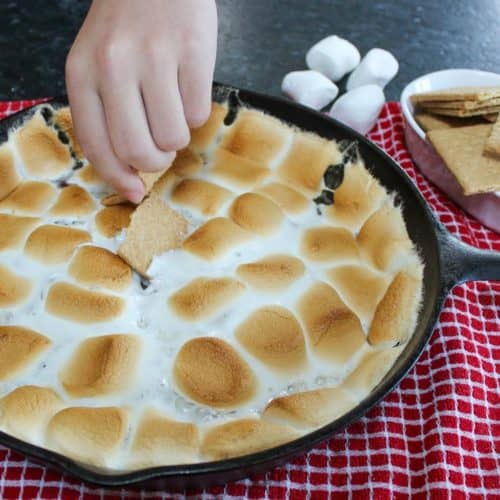 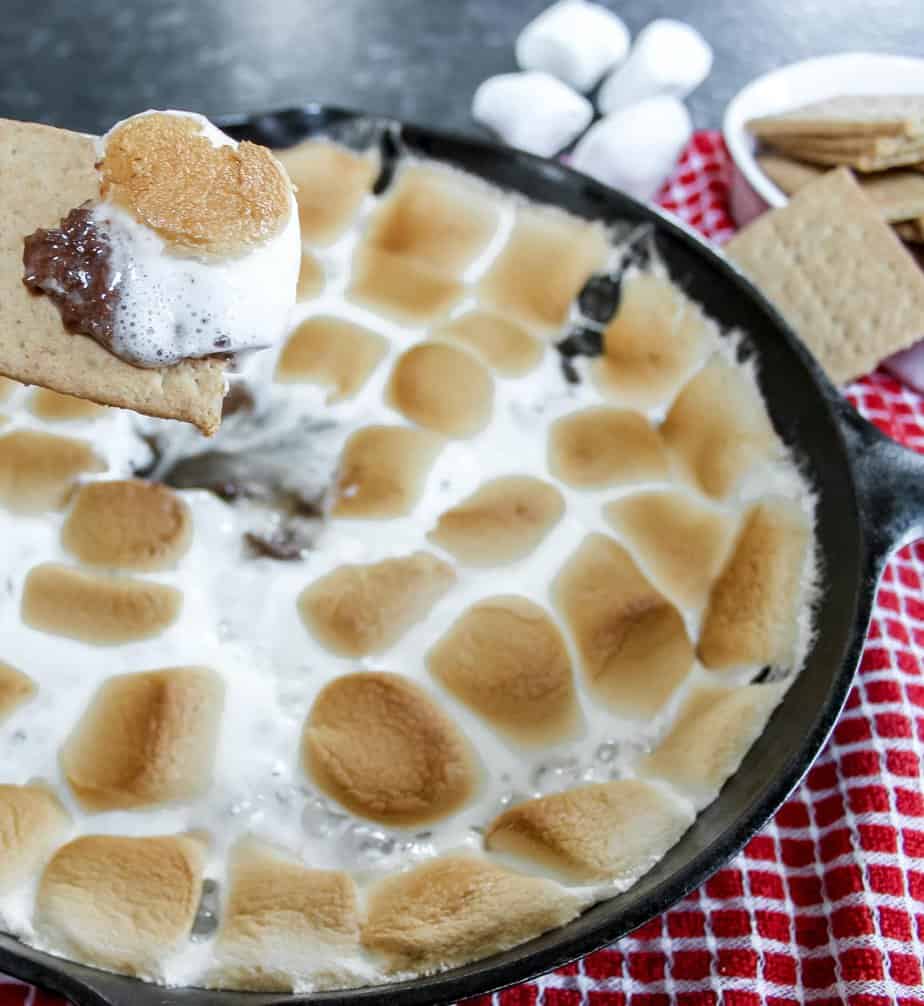 For more fun and delicious dessert recipes, click on over to:

Cherry Pineapple Dump Cake: As Easy As It Sounds