Distilleries in Frederick Md are marking their territory (distillery cat pun) on Frederick’s craft beverage scene in a big way!

And, if you’re familiar with Frederick, Maryland, you already know that craft breweries and cideries have become THE thing these days.

As a result, Frederick is becoming quite the eclectic town. And we love it!

BUT, the breweries and cideries have had to move over and make some room for the increasingly popular distilleries!

You might remember that a guest post was written for us about Frederick’s very first distillery: “Dragon Distillery: A Frederick First”.

As a result, we decided to make a recipe out of Dragon Distillery’s Clustered Spires Vodka, the Dragon Kiss Cocktail.

Yet, each distillery has it’s very own distinct character and bragging rights.

All 3 distilleries in Frederick Md are open for tours and tasting.

Just check out their individual websites for their days and hours of operation.

Tenth Ward and McClintock invited us to bring our friends for a tour and tastings.

So, how could we say no?

Tenth Ward Distillery – One of the Distilleries in Frederick Md

Our first stop was Tenth Ward.

The name “Tenth Ward” was chosen to reference the way Frederick City was divisioned during the late 19th century.

The distillery’s original location at 508 East Church Street is part of what was once considered the Tenth Ward.

*Note: We wrote this post when Tenth Ward was still located at their original location. However, we highly recommend you check out their beautiful new location.*

A large map on one of the walls in the distillery depicts the boundaries of Frederick’s Tenth Ward in 1873.

How cool is that?

Since their humble beginnings, Tenth Ward has moved to a prime spot at 55 E. Patrick Street in Downtown Frederick. 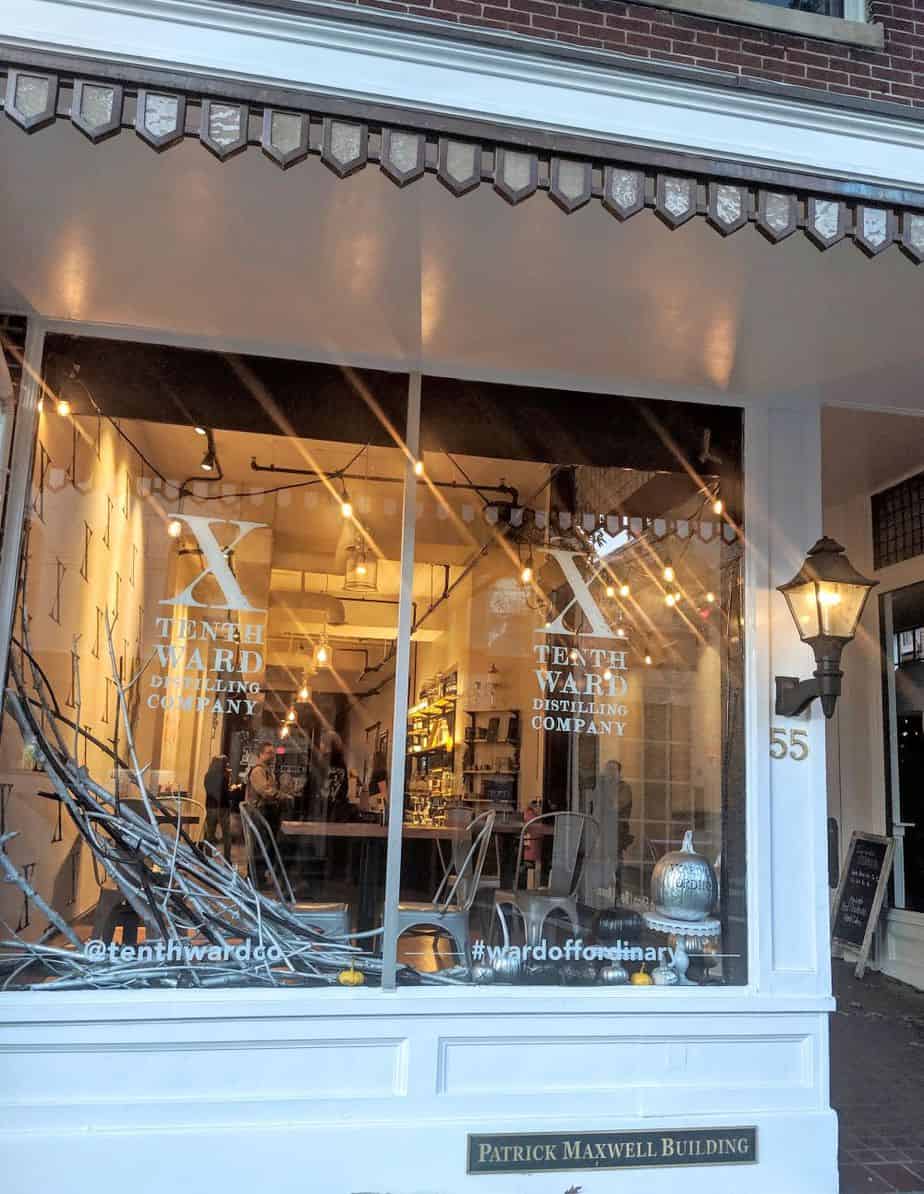 He showed us the oak and bourbon barrels as well as all of the equipment behind the scenes.

It’s so fascinating to be able to peek “behind the curtain” and to see their process of making their booze.

With a background in sustainable resource management, Monica commits to “keeping our environmental footprint as minimal as possible.”

Tenth Ward is “conscious about our energy and resource usage. We’re holding ourselves accountable to staying as locally sourced as possible.”

Therefore, it’s not a surprise that the sources for their grain, honey, mead and cider are all located within 45 minutes from the distillery. 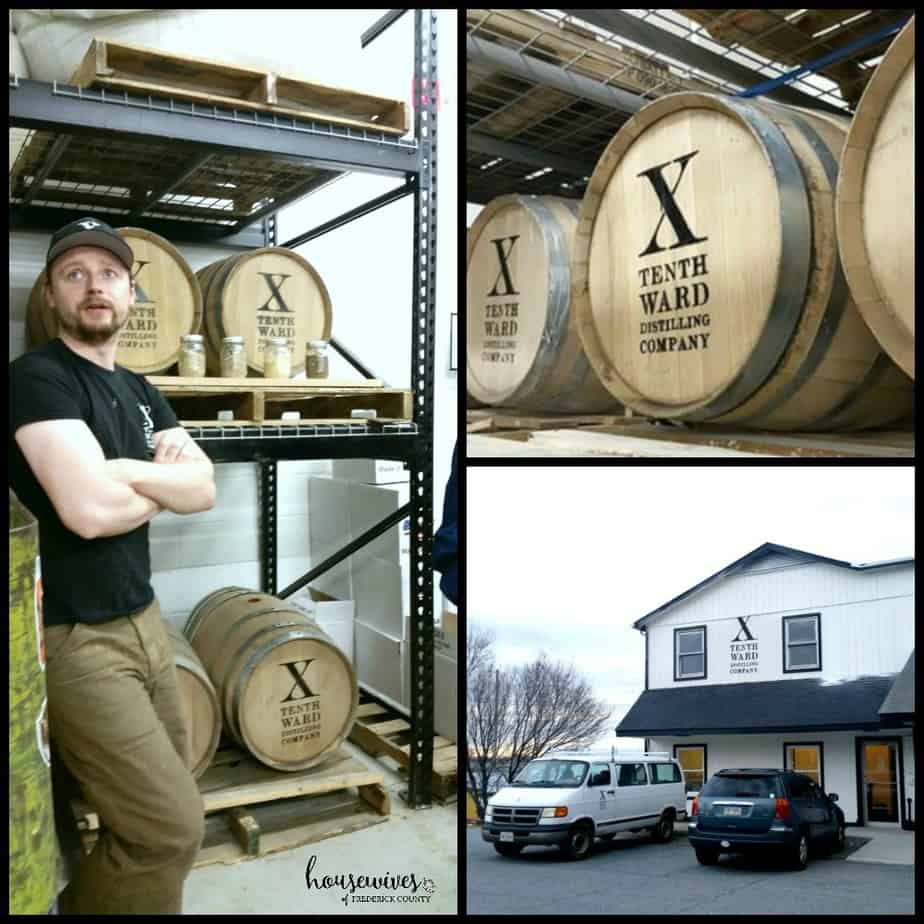 Many of the spirits’ names have been named after famous Frederick bootleggers from way back in the day, like:

Interestingly, Tenth Ward has a wall showing information on the history of these famed bootleggers.

Because some of Tenth Ward’s spirits are limited, seasonal batches, get them while the gettin is good! 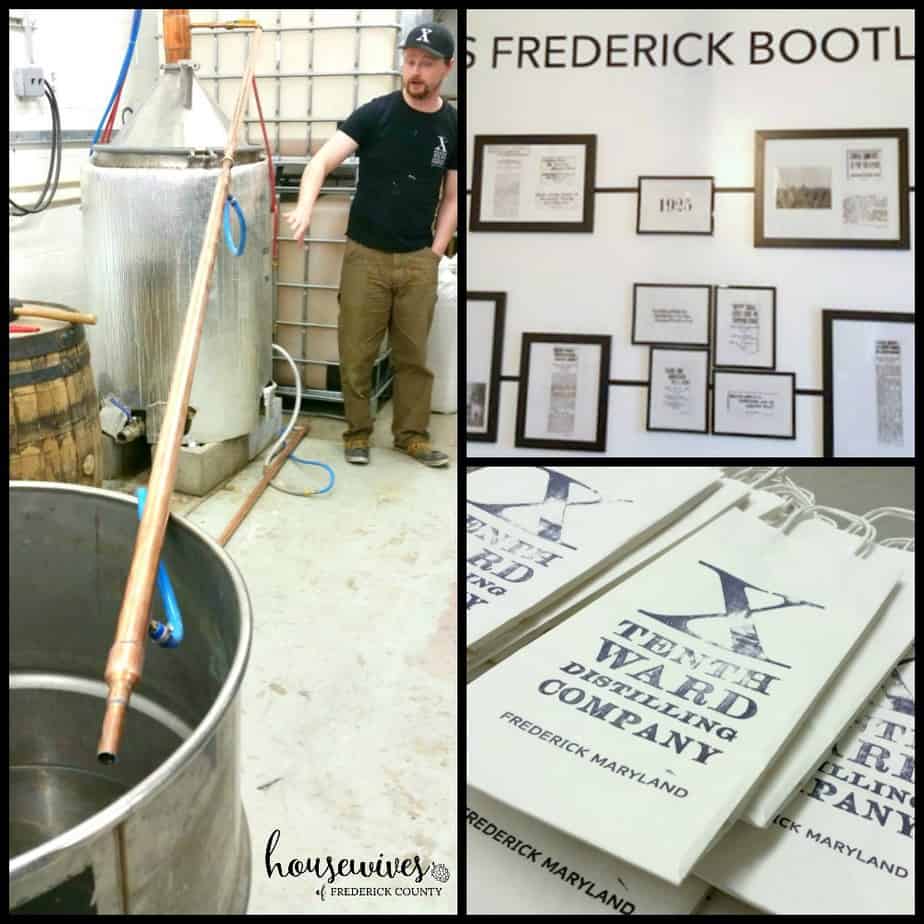 We had the pleasure of meeting Tenth Ward’s distillery cat, Verbal.

He hangs out in the distillery and helps Monica bag bottles.

And as Monica explained to me, distillery cats have their very own social media following. 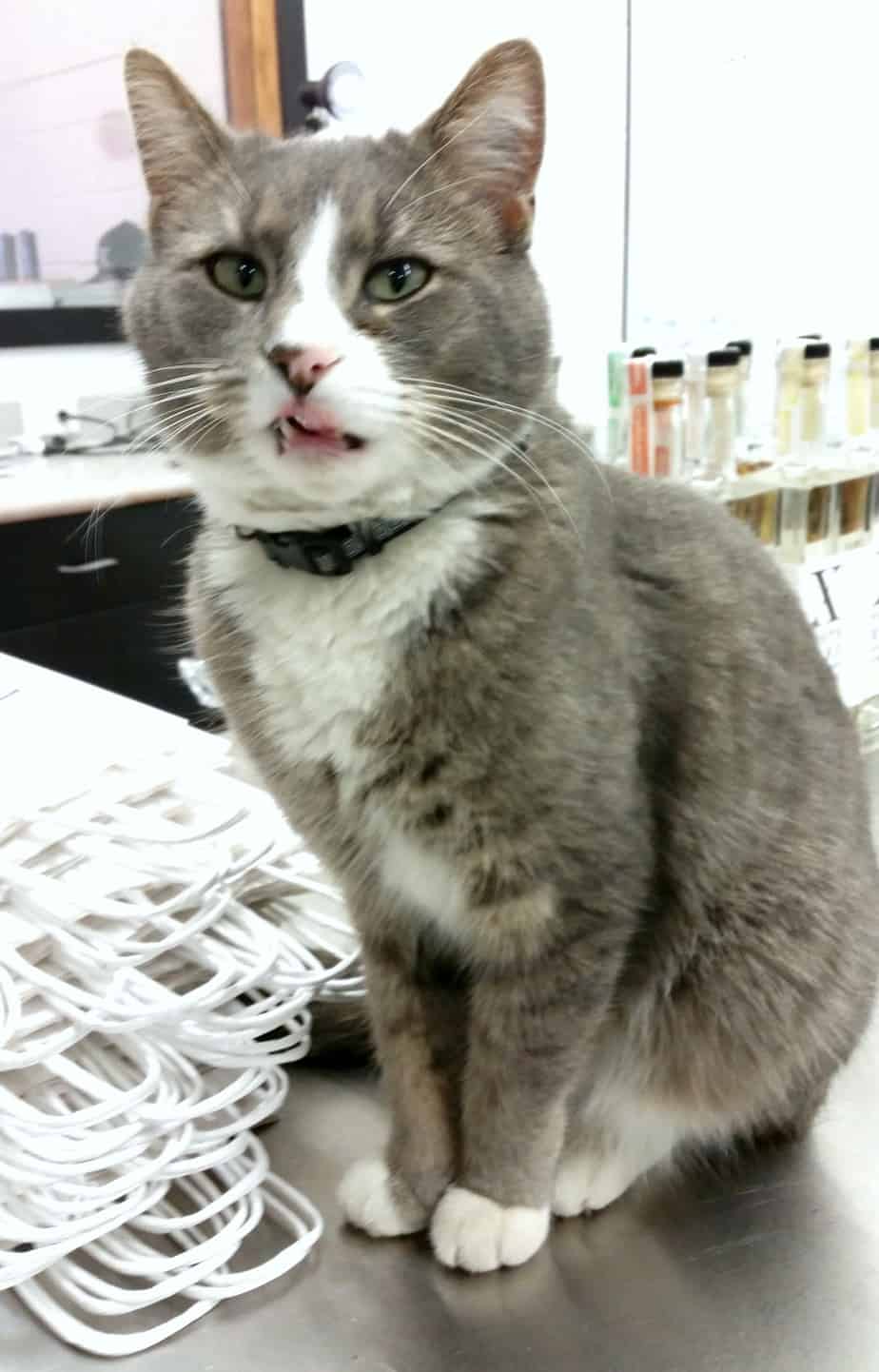 The Tastings at Tenth Ward

After Kyle explained the entire distilling process, we went back to the front room bar area to sample a few of Tenth Ward’s offerings. 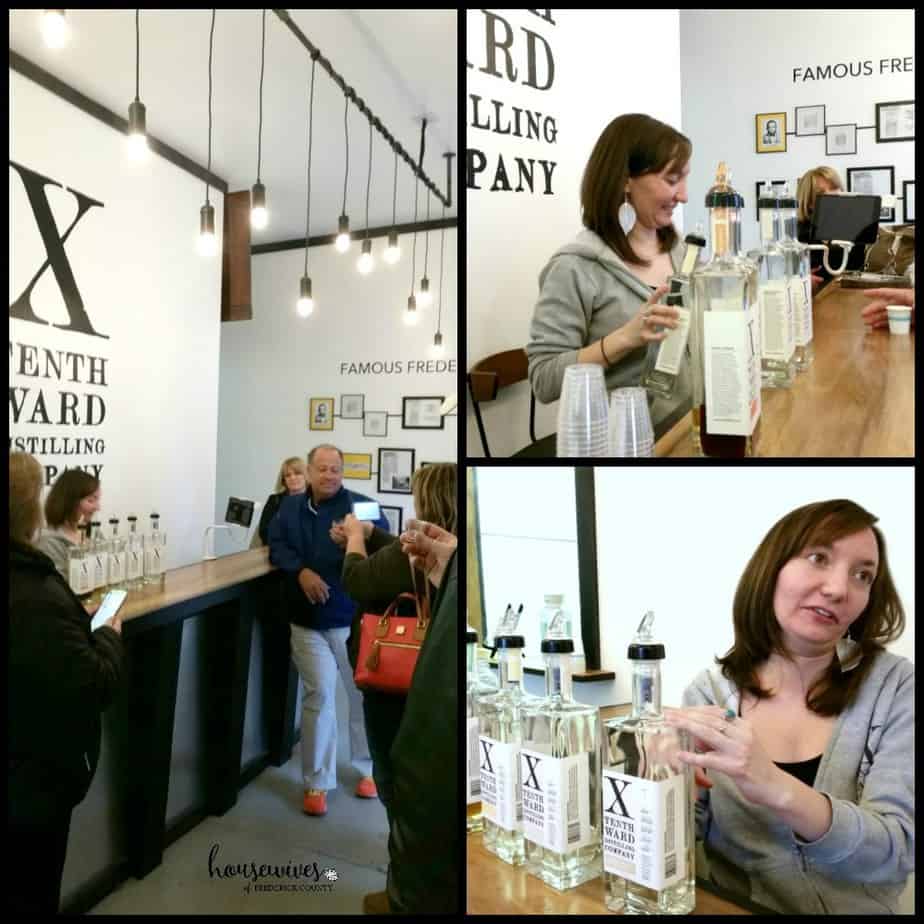 Monica explained how each spirit was made, listing their ingredients and alcohol volume. 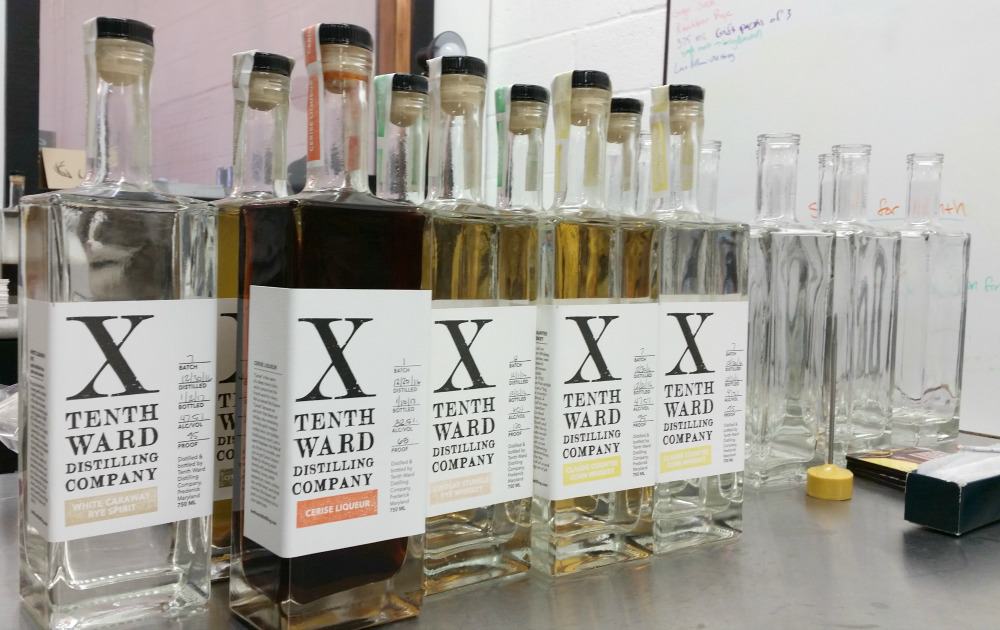 They all had their own distinct taste.

SO much smoother than the run-of-the-mill bottle of liquor you’ll find at the liquor store!

We had so much fun at Tenth Ward!

And you must check out their new digs on Patrick Street! 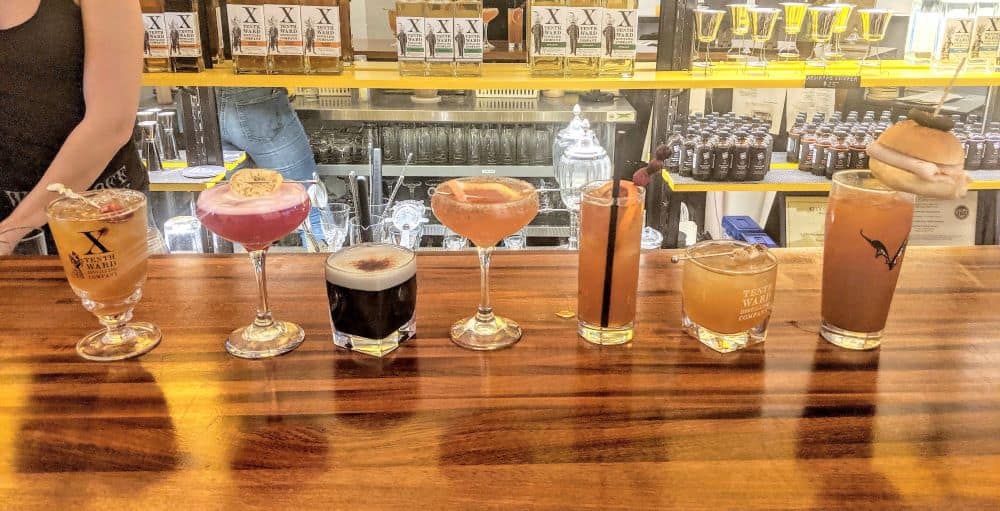 They have a cocktail lab, tasting flights, a Tenth Ward bottle club, and they now host weddings and other events.

McClintock Distilling – Another One of the Distilleries in Frederick Md

Our next stop was McClintock Distilling, located in the heart of Downtown Frederick, along Carroll Creek at 35 South Carroll Street. 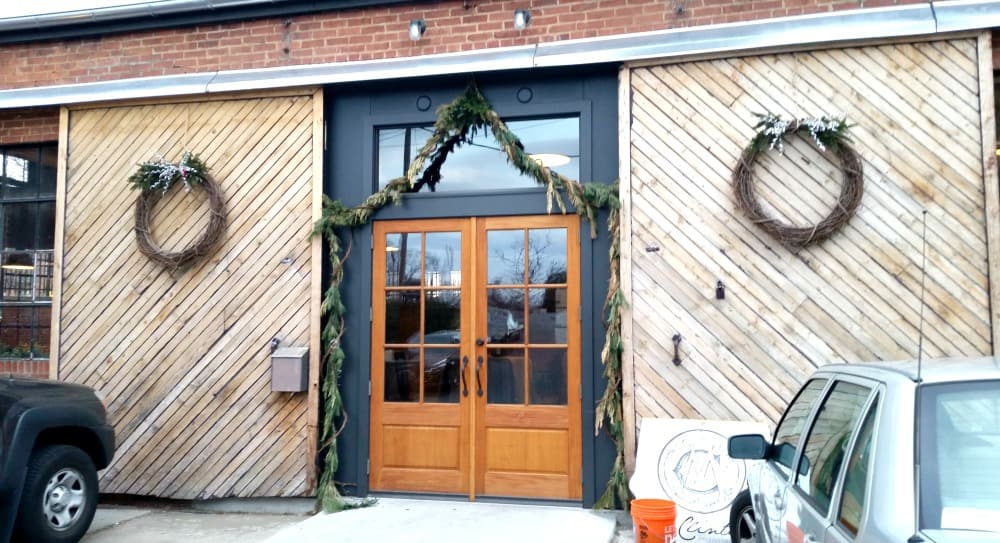 Located in a 105 year old former garage, the owners painstakingly transformed it into a state of the art distillery and tasting room.

They “fully modernized and transformed the space while highlighting and preserving the classic and historic aesthetic of the building”.

We were met by the distillery’s owners Braeden Bumpers and Tyler Hegamyer.

These guys are young, ambitious, and totally devoted to their craft.

They named the distillery McClintock after the renowned 1800’s inventor, McClintock Young, who lived in Frederick. 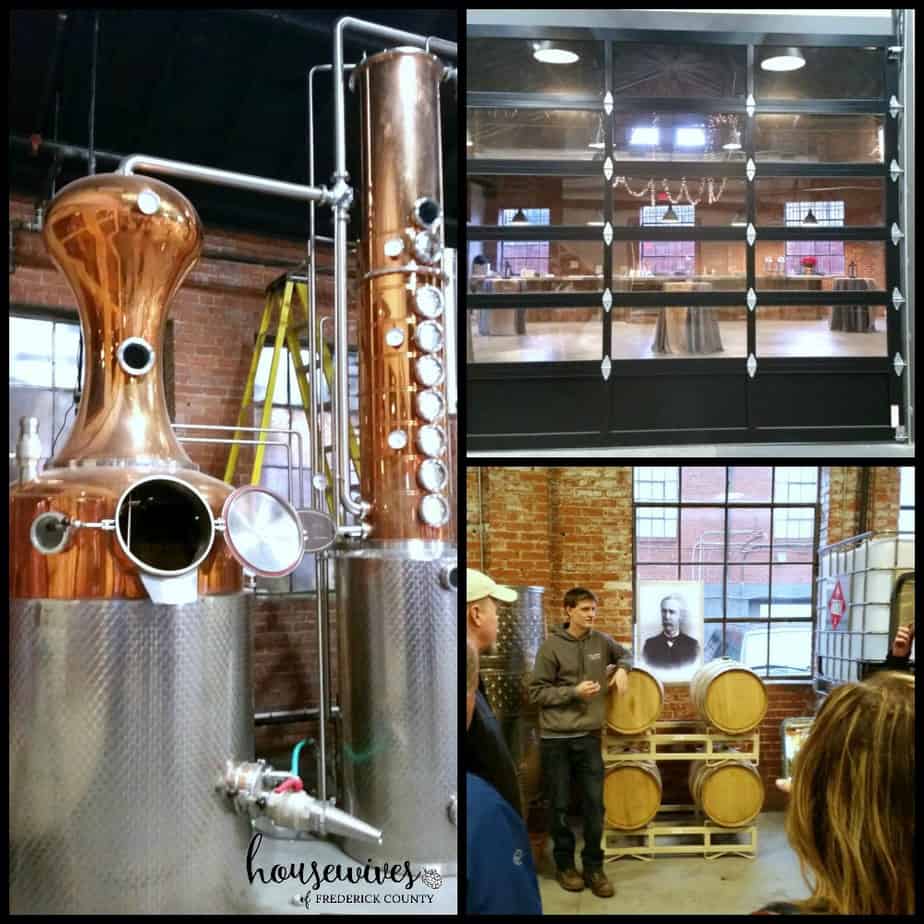 Braeden took us into the distilling room, explaining their process step-by-step.

Their equipment is seriously impressive!

They have the perfect setup to make their amazing spirits: 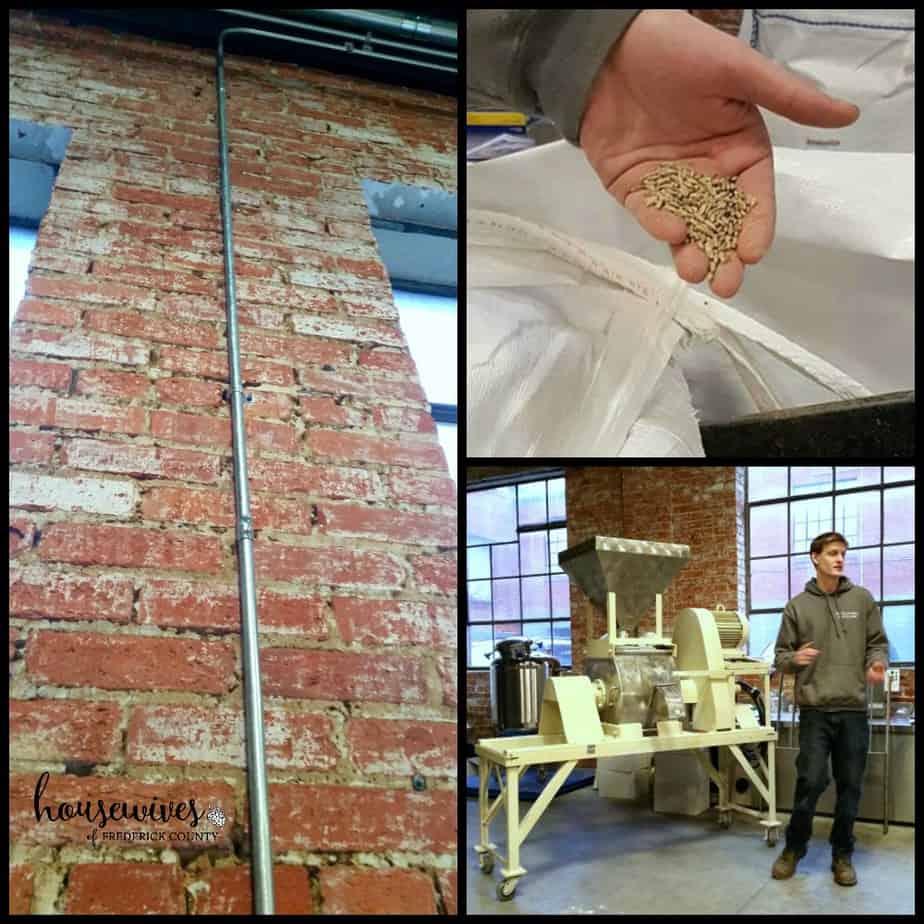 McClintock uses “local farmers in order to secure the highest quality, locally grown, organic grains as a base for our products.”

They are “dedicated to using Maryland-grown grains to process authentic Maryland spirits. By minimizing distance traveled, we will be cutting down on carbon emissions from shipping and helping to support small, family-owned Maryland farms.” 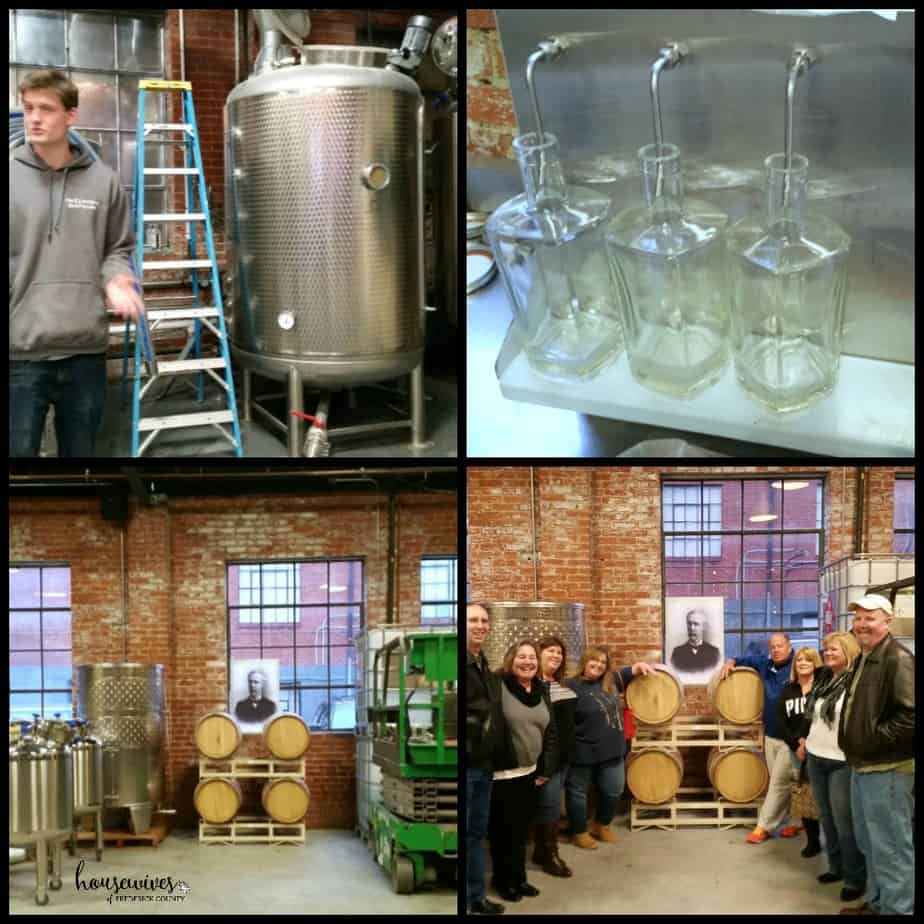 After our tour, it was time for our tastings!

At the time of our visit, McClintock had three bottled spirits available:

We tasted all of them.

They were all good, but I ultimately chose to purchase the Forager Gin.

I could ALMOST drink it straight if I was a straight liquor drinkin’ kinda girl! 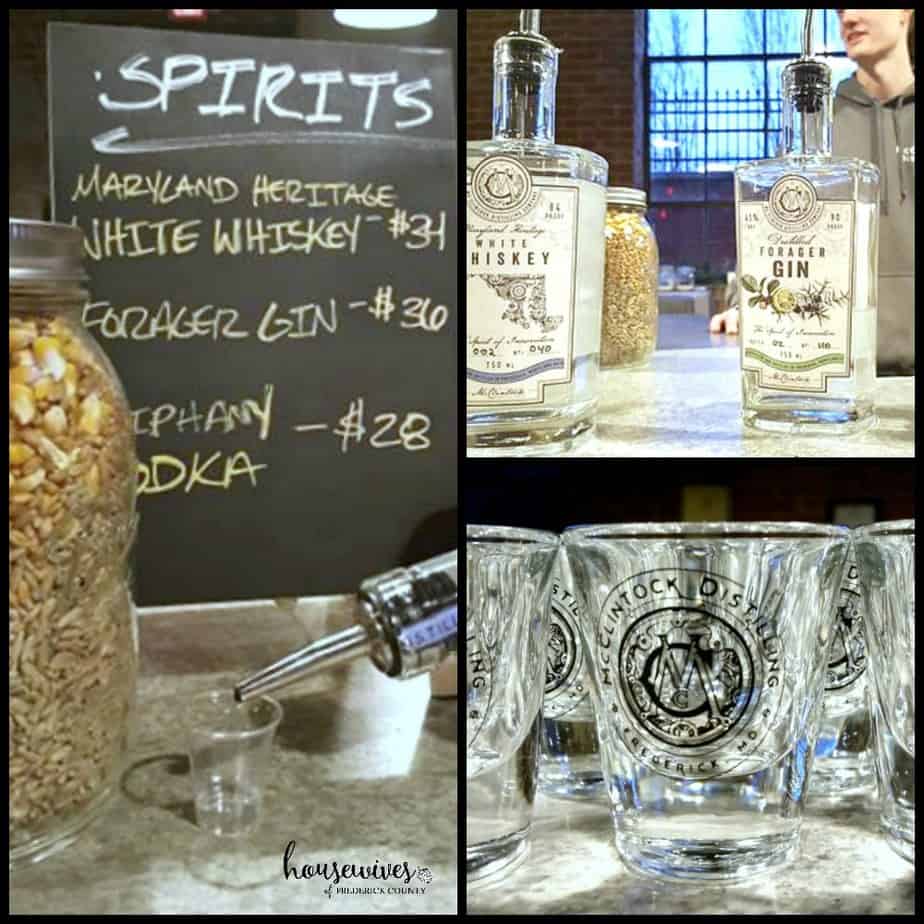 In addition to tours and tastings, McClintock offers up their gorgeous, historical space for special events. 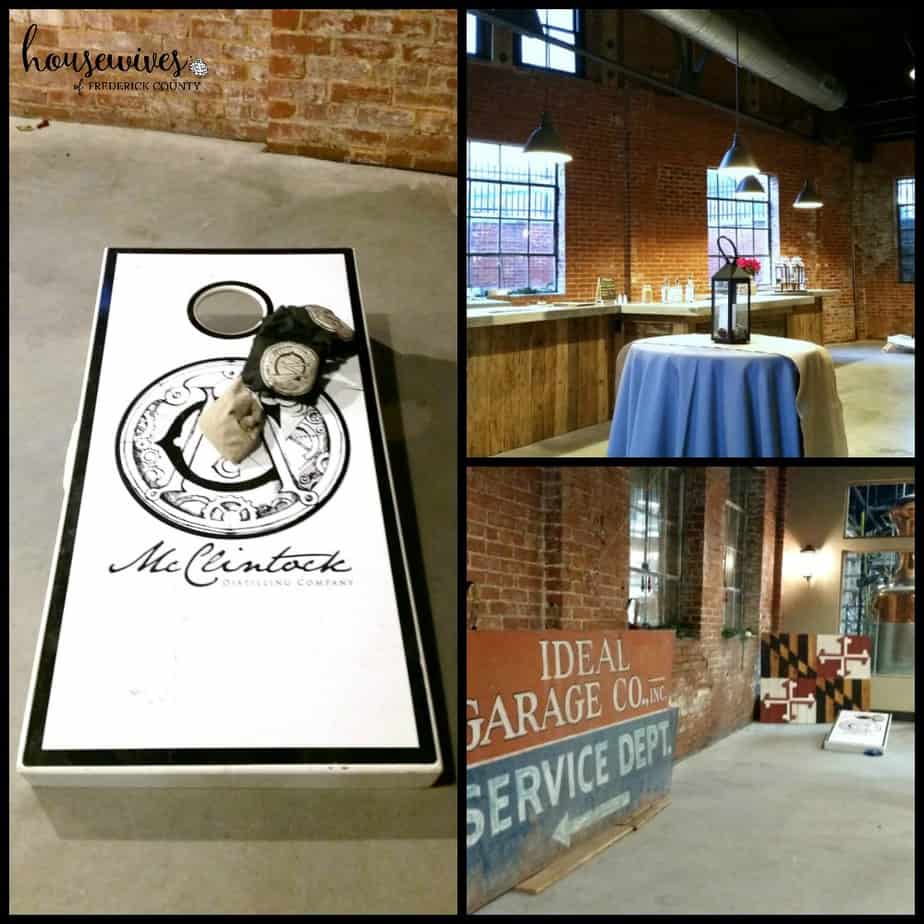 We had a great time at McClintock and will absolutely be back! 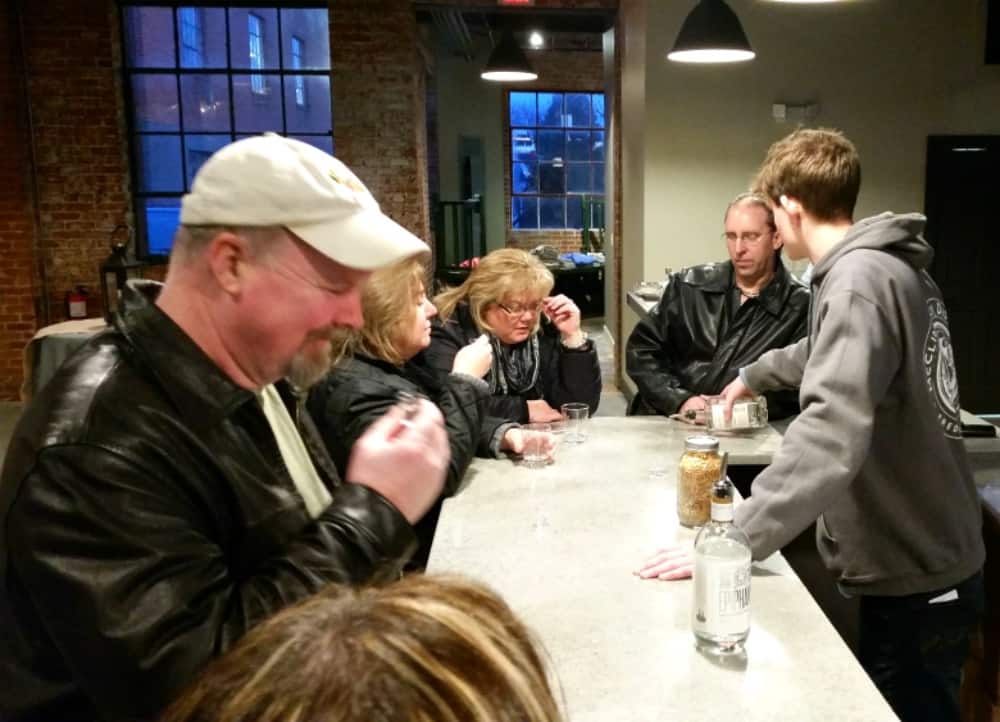 The owners of all three of the distilleries in Frederick Md are friends in real life.

Together, they have created the Frederick Area Distillery Association.

Follow Tenth Ward and McClintock on Facebook to stay up-to-date on their upcoming events and latest news.

Next time you’re in the cocktail shakin’ mood, support local business and buy your next bottle from one of these amazing distilleries in Frederick Md.

For more posts on local distilleries and drink recipes using their spirits, click on over to:

1 thought on “Distilleries in Frederick Md: Marking Their Territory in Downtown Frederick”