Breweries in Frederick Md are popping up everywhere.

We’ve put together a list of 17 best breweries in Frederick Md who brew their own style of beer right on the premises.

Whether you live in northern Frederick County or Downtown Frederick, there’s an awesome brewery near you!

Some of these breweries are large like Flying Dog, while others are very small and intimate.

Nevertheless, each and every one of these 17 breweries in Frederick Md offers something for everybody’s taste.

So, no matter where you go, there’s a nice, sudsy ‘cold one’ in a glass sitting on a bar top waiting for you!

We were also able to get some of the owners to answer our question: “What makes your brewery stand out from the rest?”

Also, we’ve included some testimonials from our readers as to why they love a particular brewery.

*All photos in this post were provided courtesy of each brewery mentioned. 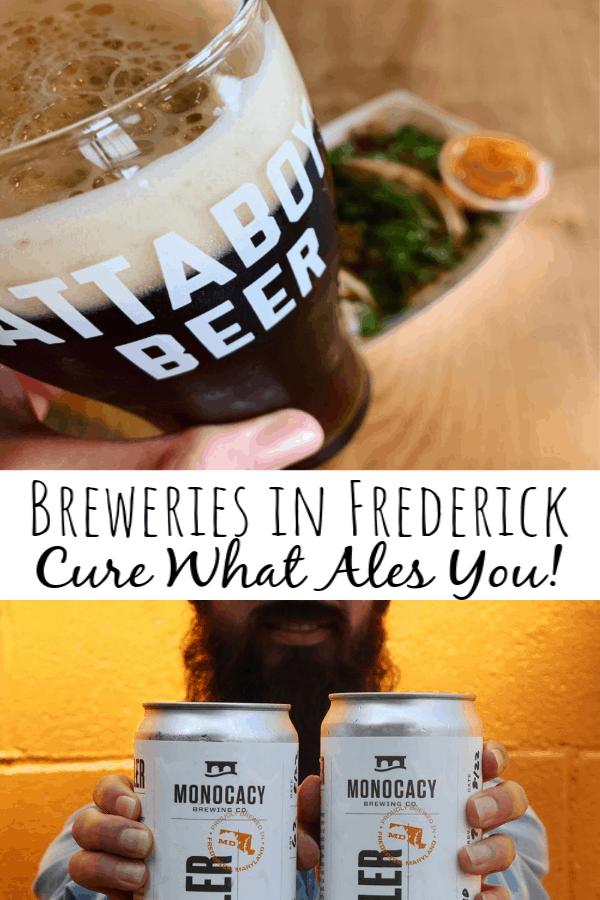 Breweries in Frederick Md We Love!

1. Attaboy Beer – One of the Pet Friendly Breweries in Frederick Md

Reader Testimonial: “Attaboy! Very family friendly, and great staff. We love the beers, trying new food trucks, and the atmosphere. We also love that we can bring our dog. Our daughter has Autism and even when she’s had meltdowns there, we’ve never felt judged or unwelcome. Great spot for a date or for a group outing.”

What’s unique about this brewery?
” I would say our differentiators are… For us, we love a cold beer at the end of a long day. We have a laid back, mellow atmosphere, and hope people find a smile and good beer when they come here. With  a beer garden and indoor/outdoor seating, we seat around 150 in good weather. We typically have one or more hazy IPAs on tap, a West Coast or Pale, a fruited sour, and we always have a Belgian style or two on. And we’ve just started doing cider using local McCutcheon’s cider, for all the gluten free folk.”

Reader Testimonial: ” Flying Dog Brewery where the beer is amazing, the ambiance and events are incredible, food truck never disappoints, and the only brewery in town that I know of that gives you 50% off your tab for having a Flying Dog tattoo!”

What’s unique about this brewery?
“Veteran-owned, farm brewery. We pride ourselves in excellent customer service and offer a selection of 20 beers and cider. Live music every Saturday (seasonal).”

Reader Testimonial: “This might be heaven! Great beers, friendly staff and beautiful location amongst the rolling hills. Want to just relax and enjoy a beer? Grab a beer and take a seat on one of the lawn chairs outside. Great time yesterday hanging with the owner, Adam, enjoying great beer and company!”

What’s unique about this brewery?
“We’re the only brewery in Frederick that is currently located directly on Carroll Creek. We gravitate toward old school English styles and newer emerging styles, like New England style IPA’s and Fruited Sours. We are in the midst of expanding to add an additional 90 seats inside and 50 seats outside, giving us a total of 300 seats.”

What’s unique about this brewery?
“Unlike everyone else, we’re a garden center and produce farm that decided to add beer to our portfolio of products.”

Reader Testimonial: “Mad Science Brewing Company near Adamstown. Very small, but super friendly owner. He grows his own hops on Thanksgiving Farms, which is owned and operated by Brian’s wife’s family. Kid and pet friendly. Food trucks and music most weekends. Grab a beer and relax or stroll around the farm and enjoy their massive assortment of flowers, plants, and gifts from the garden center.”

What’s unique about this brewery?
“We are one of the smallest, if not the smallest brewery in Frederick and mostly everything in our tasting room and the brewery has been built by hand by our owner/brewers. The two owner/brewers, a chef and an engineer, have a unique flavor perspective on flavor and process development. They focus on pulling inspiration from Belgian craft. Last but not least, we will be celebrating our two year anniversary on Sat, November 16th from 3 to 9pm. There will be 20+ handcrafted beers, a special commemorative anniversary glass, live music and Boxcar Burgers.”

9. Monocacy Brewing Company – One of the Breweries in Frederick Md That Offers a Walking Brewery Tour

10. Olde Mother Brewing – One of the Live Music Breweries in Frederick, Md

What’s unique about this brewery?
“Couple things about us, we are the largest brewery downtown and we are a live music venue.”

Reader Testimonial: “Olde Mother Brewing Co. Rosé beer! Because I am a wine girl and it was nice they have something that I found unique and tasty for me!”

13. Rockwell Brewery – One of the Breweries in Frederick Md with a Beer Garden

14. Smoketown Brewing Station – One of the Breweries in Frederick Md Where You Can Bring Your Own Food

Reader Testimonial: ” Smoketown Brewing Station – food trucks regularly, tons of beer on tap. Always have new beer to try! They are located in a historic fire station and are very keen on fostering their history! They have a beer called “The Patsy” which pays tribute to Country Music icon Patsy Cline who once performed at their brewery location (former Brunswick Volunteer Fire Co.)”

What’s unique about this brewery?
The biggest thing that sets us apart from other breweries is our First Taste Friday event. Every Friday we release two new beers. In addition to those, we have a vast array of other options including 6 to 8 other beers, 12 wines, and 18 spirits. We are Maryland’s first winery, distillery, and brewery.

Which brewery is your favorite?

While you’re pondering on that answer, take a look at our posts on: