In this post I’m going to give you an easy peasy, delicious recipe for Shredded Chicken Tacos.

I used the Instant Pot to make this recipe because it is a great way to quickly and conveniently cook tender and flavorful, shredded chicken.

However, you can cook your chicken whichever method you prefer. 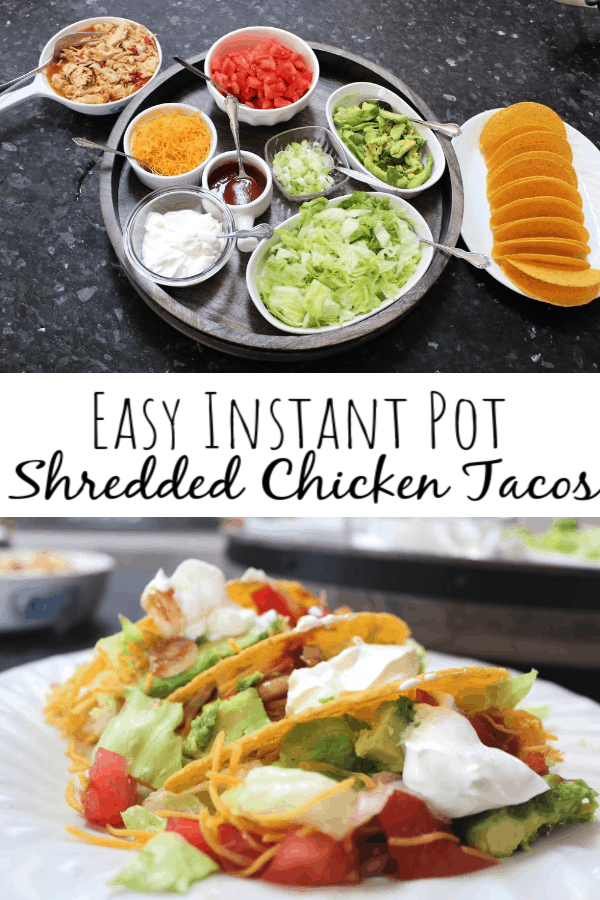 You’re going to love these Shredded Chicken Tacos so much that Taco Tuesday will become Taco Friday and maybe even Taco Sunday too!

Admittedly, I have never ever used the Instant Pot until now.

I guess I didn’t feel the need to use an Instant Pot because I preferred to either cook a meal in my slow cooker or just cook it on the stove.

Obviously, you can still do that for this particular recipe if that is your cooking method of choice. 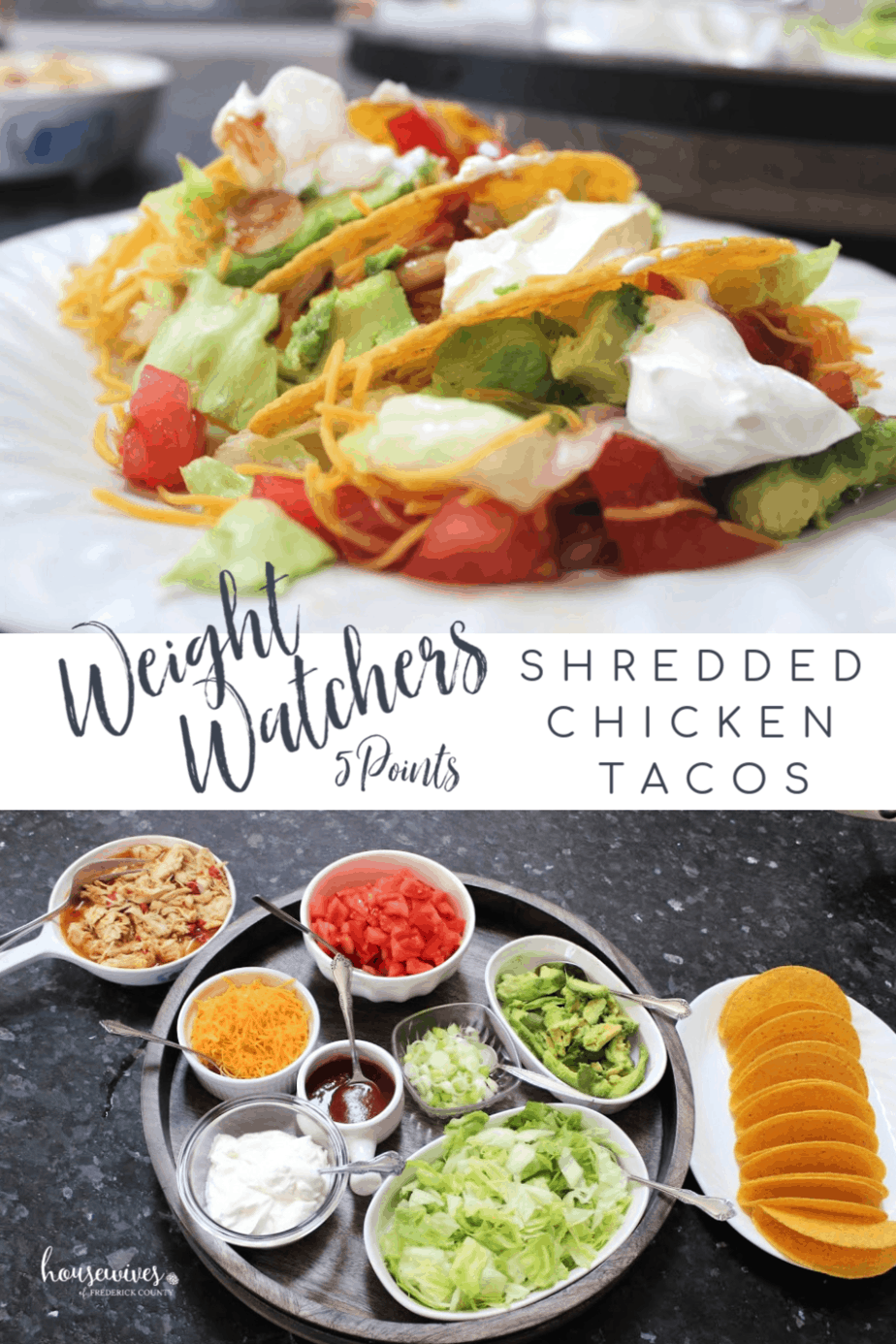 What is the Best Way To Cook Chicken To Shred It?

So, I’ve done a LOT of chicken cooking!

I’ve boiled it, fried it, baked it, grilled it, slow cooked it and sauteed it.

Based on my own experience, the best way to cook chicken to shred it is to either boil (poach) it, slow cook it, or use the Instant Pot.

What Are the Benefits of Cooking with an Instant Pot?

So what are the benefits of an Instant Pot that a slow cooker or stove top cooking can’t offer?

Notably, the Instant Pot is a one-stop-shop, as it can perform multiple functions such as:

I had no idea!

Needless to say, these Shredded Chicken Tacos will not be my last recipe I create using the Instant Pot!

How to Use the Instant Pot

I wanted to include this information for those of you who have not used an instant pot before now.

Being that I was a little bit intimidated to use the Instant Pot before making this recipe, there’s a chance you might be too.

There are several parts to it and you have to make sure you’re using them correctly.

I found this great YouTube video explaining all of the pieces of the Instant Pot and how they work:

After watching this video I felt way more confident and was ready to start making my recipe.

What Type of Chicken is Best For Shredding?

Honestly, I don’t think there is any part of the chicken that you can’t shred.

However, if I were to have my preference, it would be boneless, skinless chicken breasts.

Clearly, using boneless and skinless will save you the time of removing the skin and bones when you’re shredding the chicken.

How Do You Make Chicken Tacos From Scratch?

The only labor intensive part of the process is cutting up the toppings, but even that doesn’t take very long.

This is pretty self-explanatory.

Just throw it all in there! 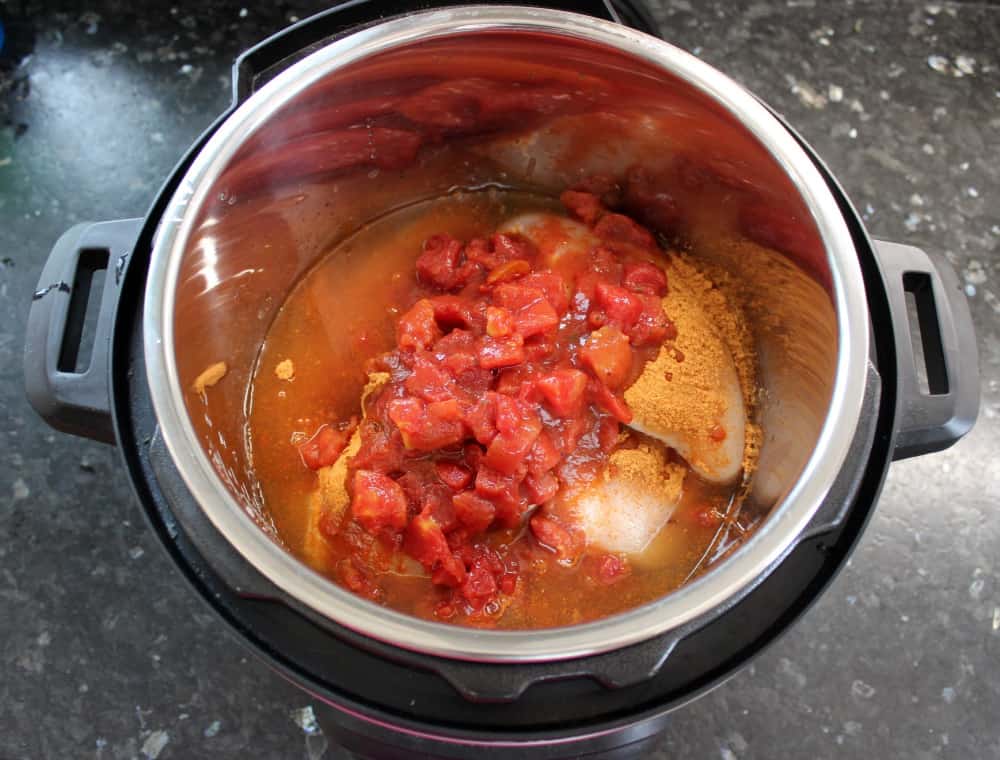 Cook in the Instant Pot for 20 minutes.

However, if your chicken breasts are frozen, cook for 30 minutes.

Step 3: Cut Up Toppings and Bake Your Taco Shells

While you’re chicken is cooking, now is the best time bake your taco shells and/or tortillas and slice your toppings.

Your choice of taco toppings can be anything you want!

Then place each topping in it’s own serving bowl.

This set of souffle dish ramekins (Amazon) is perfect for placing your toppings.

The separate bowls keeps the toppings separate so they don’t get all mixed together.

This step actually sounds kind of scary when you first do it, but it’s really easy.

Just turn the vent knob to the ‘Vent’ position.

Then de-pressurize until the float valve drops down.

After that, uncover the Instant Pot and shred the chicken using a large fork.

Although the cooked boneless, skinless chicken was tender enough to easily shred with a fork, I did use a knife to speed up the shredding process.

Or you can use long wood handle meat shredding claws like these on Amazon. 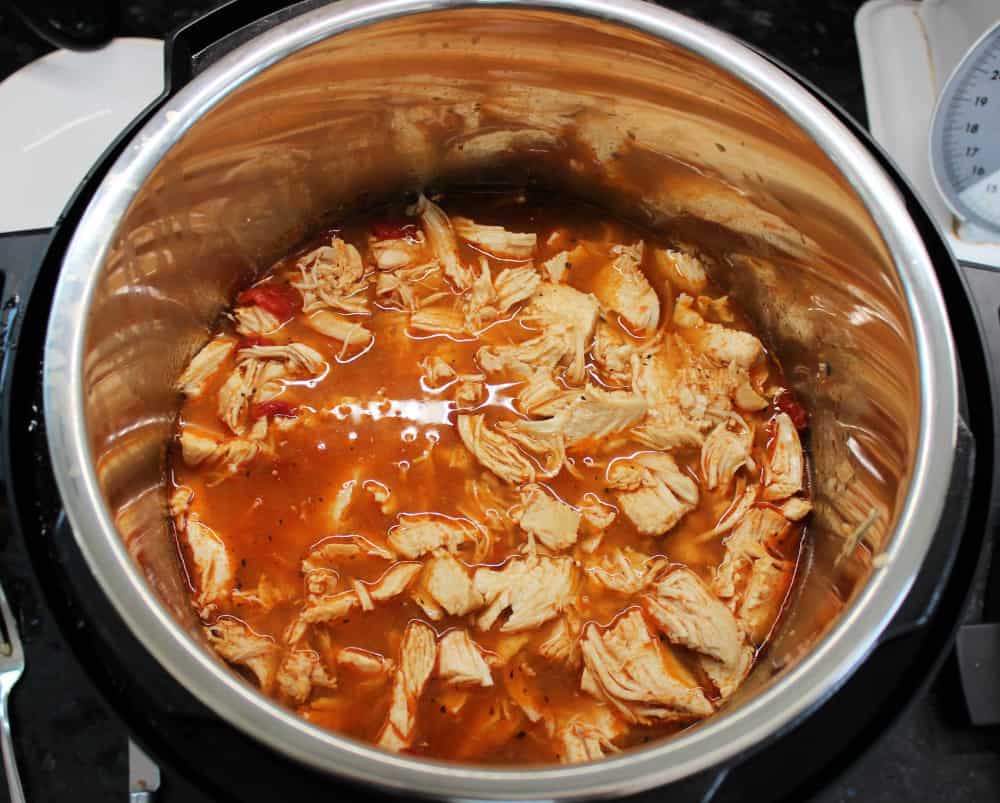 How to Serve your Instant Pot Shredded Chicken Tacos

You can either use a large platter to space out your taco toppings, or you can put each topping in it’s own bowl like I did.

I placed all of the bowls with spoons in each bowl onto a rustic large lazy susan (Amazon) on our kitchen island for easy access from either side.

The taco shells were placed on a platter.

You can also use these clever stainless steel taco shell stands (Amazon).

Just fill your shells up and you’re ready to roll!

No fuss, no muss!

Lastly, the shredded chicken was put in a separate, larger bowl. 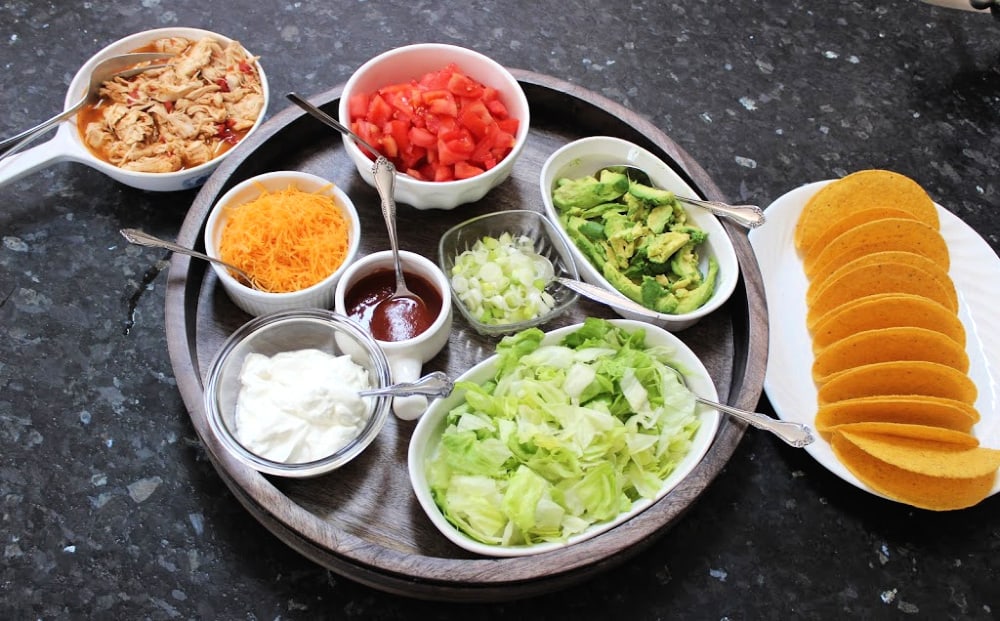 How Do Shredded Chicken Tacos Taste?

Oh my goodness, the shredded chicken was delicious!

It was so tender and full of flavor.

One thing I didn’t do was put enough spices in with the chicken while it was cooking.

I had decided to double the recipe since we were having Terri’s family over for dinner.

However, I only added 1 packet of the taco seasoning.

Therefore, my husband added a 2nd packet after it was cooked.

As a result, it definitely enhanced the flavor! 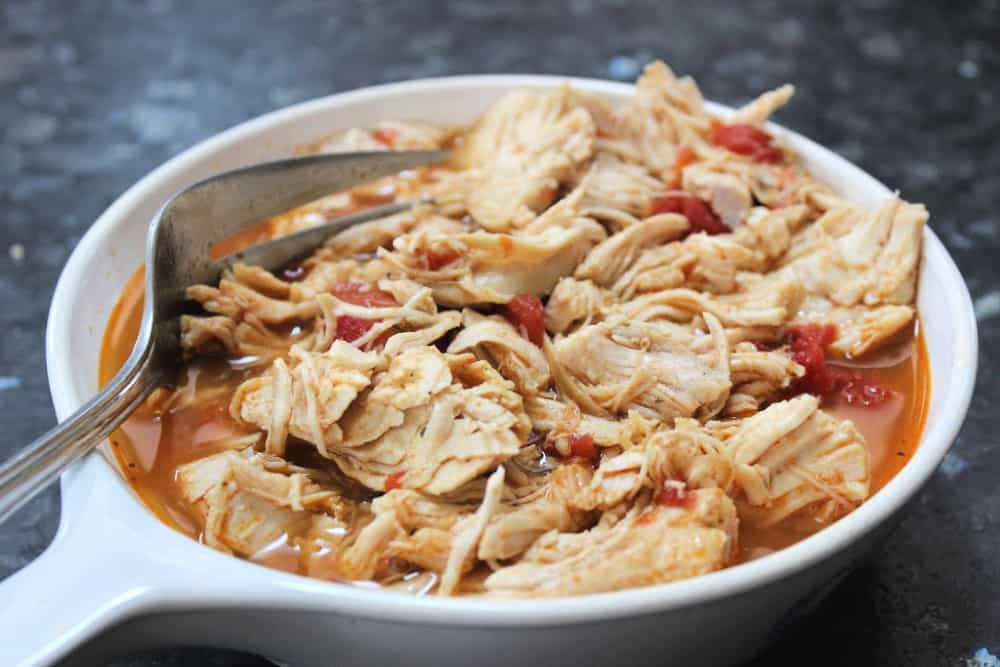 These shredded chicken tacos were amazing!

As a matter of fact, my new meat of choice for tacos is shredded chicken.

You don’t get that greasy, bottom of the shell effect like you do with ground beef.

AND you save a lot of fat and calories too! 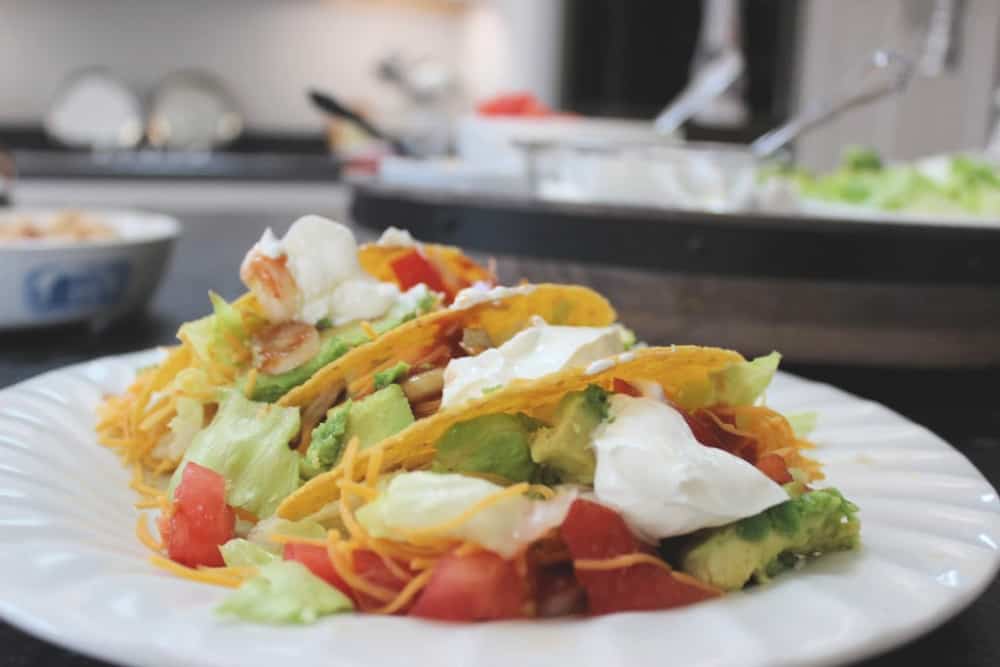 Another benefit is that we have a lot of shredded chicken leftover, which means we can use it for other meals throughout the week!

So if you’ve hesitated to try out the Instant Pot like I did, just jump right in and try it for yourself!

I actually borrowed Terri’s Instant Pot before deciding if I should buy one for myself.

I now know that I need to get me one!

To buy your own Instant Pot, go to this page on Amazon, which lists a slew of different Instant Pot models and even colors!

The prices have gone down since Instant Pot first came out.

It’s a lot more affordable for a product that will get a LOT of use in your kitchen! 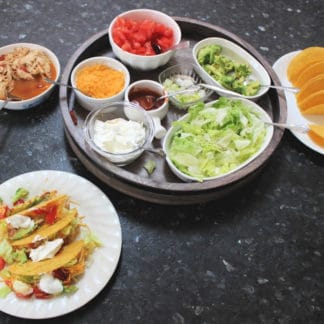 For more great recipes, click over to our posts on: