There are 3 covered bridges in Frederick Md conveniently within close proximity to each other.

Lucky for us, out of only 6 covered bridges in Maryland, 3 of them are located right here in Frederick Md.

All 3 of the Covered Bridges in Frederick Md were recorded on the National Register of Historic Places on June 23, 1978.

Visiting these covered bridges is something I’ve always wanted to do, but have never taken the time out to do it until now.

All of Frederick’s covered bridges are included in this Only In Your State article.

Take note that when you go on your scenic tour to see the covered bridges in Frederick Md, be sure to Google the directions, as these bridges can be a challenge to find.

In addition, we have included directions to each of the 3 covered bridges below. 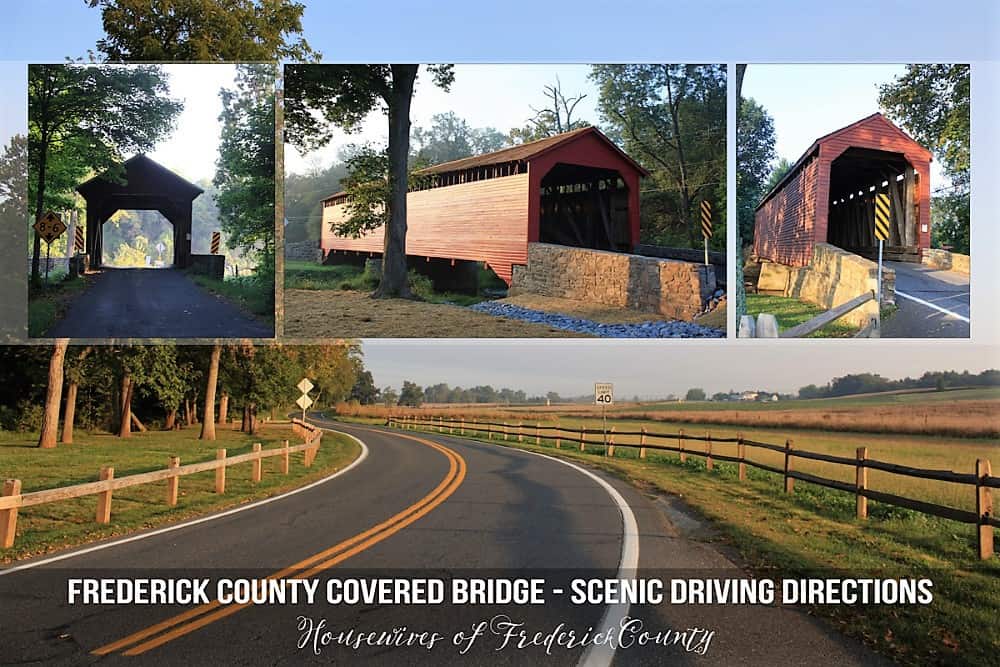 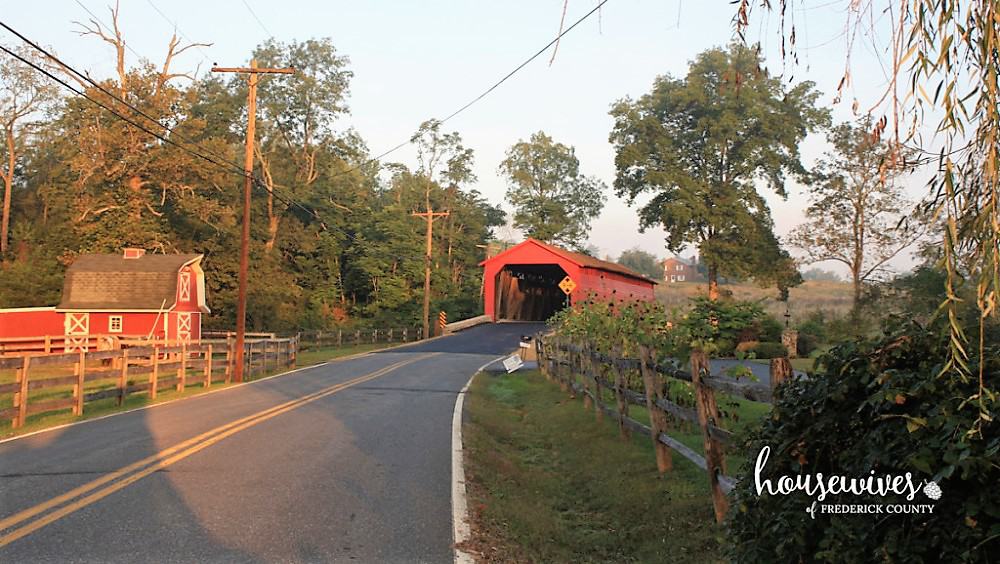 The first of the covered bridges of Frederick, Md that I visited was Utica Mills Bridge.

How to Get To Utica Mills Bridge

Then, you’ll see the bridge just ahead.

As I approached the bridge in my car, I realized that there is no place to park because it’s located on a residential road.

Certainly, I was a little bit disappointed.

However, I turned around and found a small area on the side of the road to park and take some quick pictures.

Utica Mills Bridge was built in 1843 and crosses over Fishing Creek. 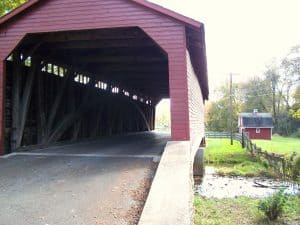 However, in 1889 the Johnstown Flood washed the bridge away.

Luckily part of the original bridge was saved, reconstructed and relocated to its current location on Utica Road. 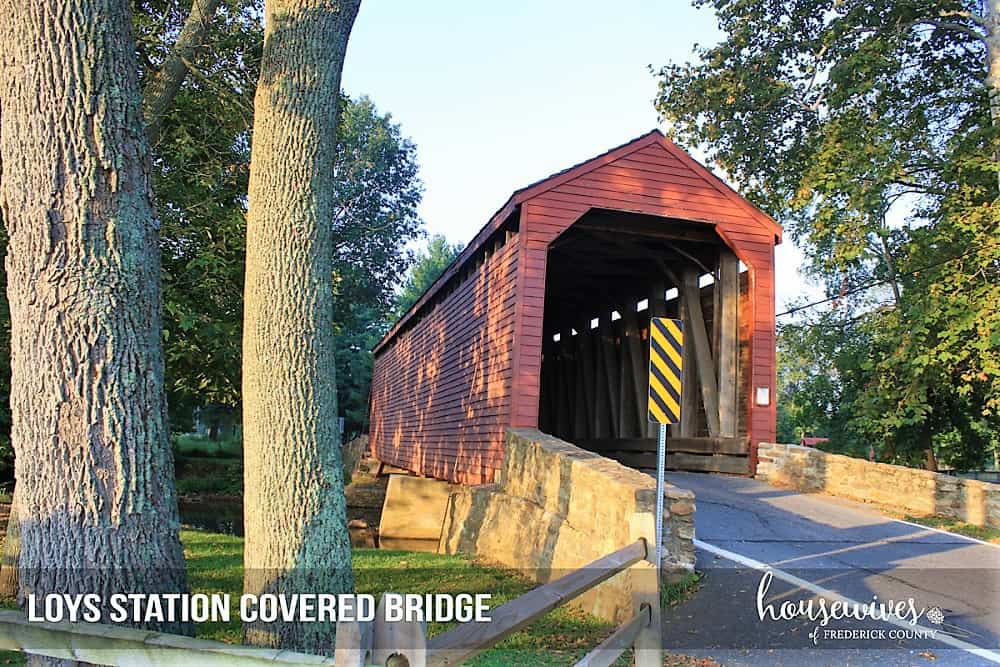 The second of the covered bridges of Frederick, Md that I visited is Loys Station Bridge.

How To Get To Loys Station

From Utica Mills Bridge, head back to Old Frederick Road and turn left.

After that, go left and then take a quick right towards Loys Station Park.

There is plenty of parking available at this location as the bridge is surrounded by a beautiful park.

Specifically, the park has a playground, picnic tables, a pavilion, and bathrooms.

It a beautiful spot to bring the kids, have a picnic and enjoy the gorgeous scenery.

This bridge was originally built in 1848 and crosses over Owens Creek.

However, in 1991 a truck was set on fire while sitting on the bridge as an insurance fraud scheme.

As a result, the arson destroyed the bridge. 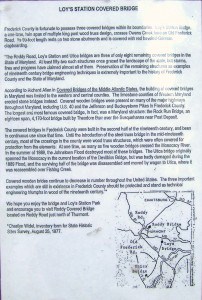 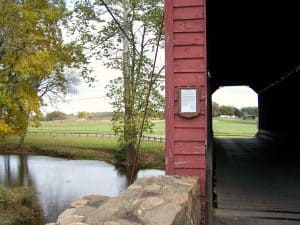 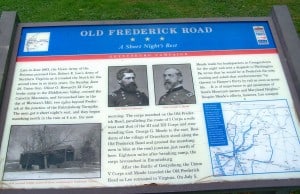 Interestingly, the Western Maryland Railroad had a station stop at Loys at one time.

So the bridge became known as Loys Station Covered Bridge and the tracks still exist today.

Of historical interest, it is believed that on July 7, 1863, after the battle at Gettsyburg, General George Meade crossed Loys Station Covered Bridge while pursuing the retreating Confederate Army. 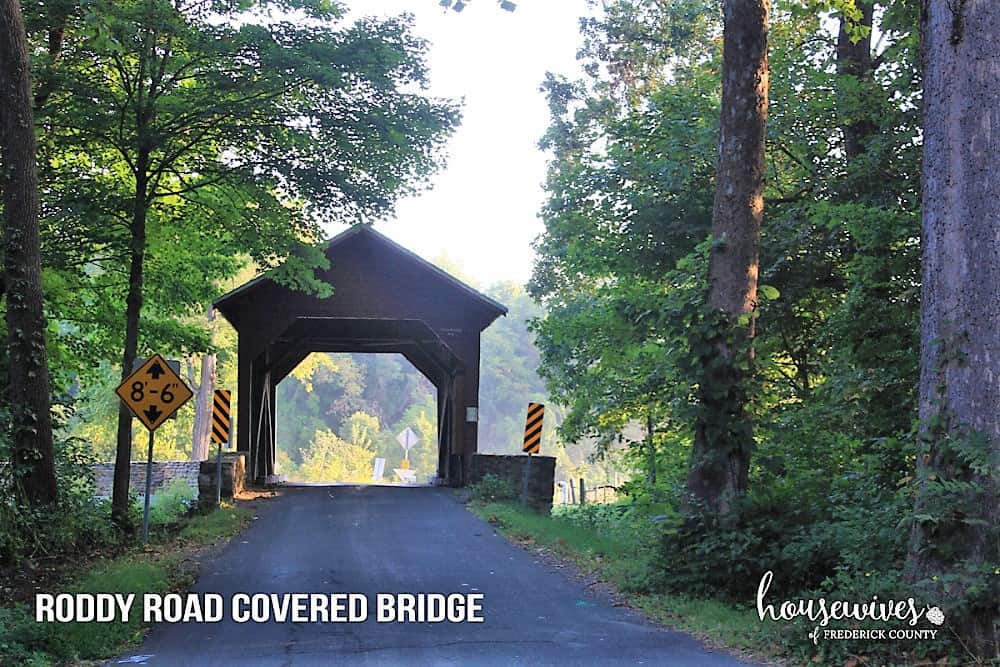 The third of the covered bridges of Frederick, Md that I visited is Roddy Road Bridge.

How To Get To Roddy Road

Travel through Loys Station Bridge to the stop sign.

Turn left onto Rt 77 and travel 1.6 miles into the town of Graceham.

Then turn right onto Graceham Road.

After crossing the railroad tracks, immediately bear left and proceed to the stop sign at Apple Church Road.

The total distance from Graceham Road to Apple Church Road is 1.3 miles.

Travel through the bridge to park near the intersection of Roddy Road and Roddy Creek Road.

When I got there, I was able to park in a little gravel parking lot across the little street and walk over to take pictures.

Roddy Road Bridge was built in 1856 and hails over Owens Creek.

It is common belief that Confederate General Jeb Stuart and his calvary crossed Roddy Road Covered Bridge on July 5, 1863 during the Gettsyburg campaign of the Civil War.

However, there are no records indicating any battles took place at or near the bridge.

Roddy Road bridge is the smallest covered bridge in Maryland.

It measures just under 40 feet in length. 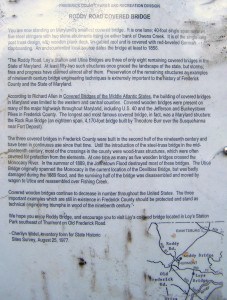 You can walk down to the creek underneath and do some fishing.

I saw some really nice looking fish swimming around under there.

It is hard to describe the peace I felt when I parked my car and walked over to this bridge to take pictures.

Besides the slight background sound of the cars on Rt. 15, it was extremely quiet except for the sounds of nature and the water running under the bridge.

Not once did a car drive over the bridge while I was there.

When you’ve finished your tour, to get back to Rt 15, take Roddy Creek Road for .5 miles.

Then, turn left for Rt 15 South to Frederick. 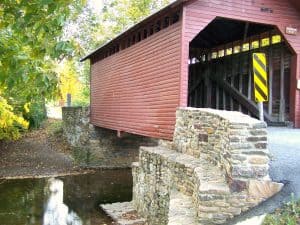 Covered Bridges Give You The Feeling Of Stepping Back In Time

So, now I can cross visiting the 3 covered bridges in Frederick County off of my bucket list.

But this won’t be the last time I visit them.

All 3 of these bridges are gorgeous to see and give you the feeling of stepping way back in time.

As a matter of fact, they’re breathtaking.

If you ever get the chance, visit them for yourself.

I guarantee, you won’t regret it.

Lastly, one of our readers commented on this post and gave us a great tip!

“By the way, all three bridges are within a relatively easy bicycle ride of each other. There is a fourth covered bridge in southern Pennsylvania near Gettysburg, Sachs Covered Bridge. Though I discovered it and have ridden to it several times on my bike, it is a hike. It’s a pedestrian bridge, at this point, no vehicular traffic is allowed to cross.”

For more on historical spots to explore in Frederick, Md, check out our posts on:

Buckeystown, MD: Something For Everyone! 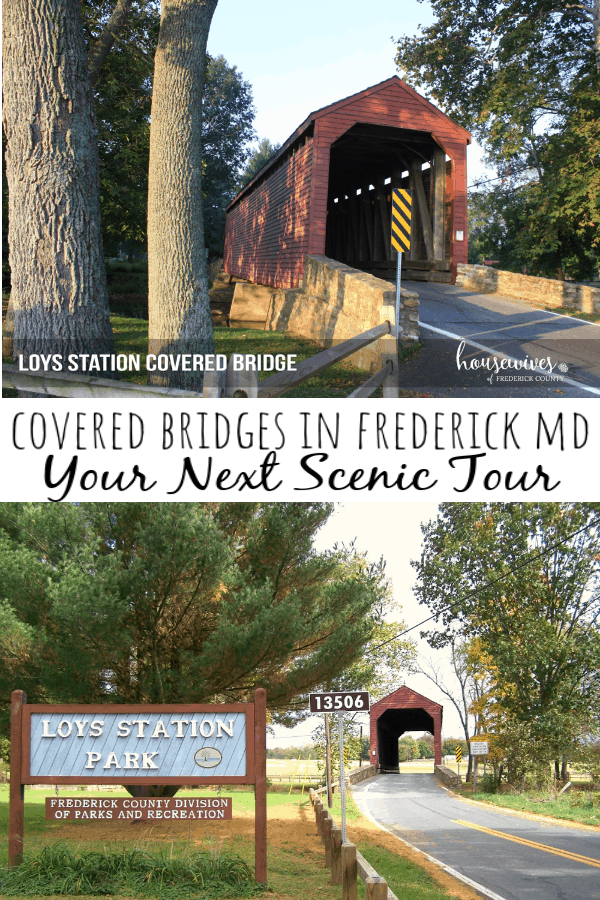 6 thoughts on “Covered Bridges in Frederick Md: Your Next Scenic Tour”